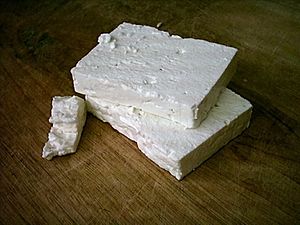 Feta cheese (Greek: φέτα, feminine gender; pronounced), or simply Feta is a kind of cheese. Usually it is made from the milk of sheep or goats. Feta cheese originally is from the Greek mainland, or from Lesbos in the Aegean Sea.

Other cheese (which is usually not from Greece and is usually made from cow milk) must not be called Feta from 2007.

What is now called feta cheese was known to Ancient Greeks. Homer must have known about it. There were several references to the cheese in the Odyssey. According to the myth, the cyclops Polyphemos was the first cheese manufacturer. He carried the milk in animal-skin bags. He had collected the milk from his sheep. He was very surprised to see that days later the milk had become solid. When Polyphemus tried to eat it, it tasted well. He also found that as such a solid, it would go bad later than with milk.

The name Feta has an Italian origin. It is derived from fetta (slice), and dates back to the 17th century. Very likely this referred to the method of cutting the cheese in slices to put it in barrels.

All content from Kiddle encyclopedia articles (including the article images and facts) can be freely used under Attribution-ShareAlike license, unless stated otherwise. Cite this article:
Feta cheese Facts for Kids. Kiddle Encyclopedia.