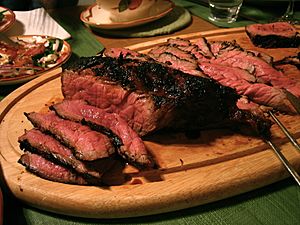 London broil is a beef dish made by broiling marinated beef, then cutting it across the grain into thin strips. Despite its name, the dish and the terminology are North American, not British.

"London broil" originally referred to broiled flank steak, although modern butchers may label top round, coulotte, or other cuts as "London broil", and the term has come to refer more to a method of preparation and cookery than to a specific cut of meat.

The preparation of London broil typically involves marinating the meat for several hours followed by high heat searing in an oven broiler or outdoor grill. It is then served in thin slices, cut across the grain.

In parts of central Canada, a ground meat patty wrapped in flank or round steak is known as a London broil. Some butchers will wrap the flank steak around a concoction of seasoned and ground or tenderized flank steak. Others sell a pork sausage patty wrapped in flank or top round steak labelled as London broil. Another variant, popular in Southern Ontario, is a London broil "loaf", wherein the tenderized flank steak exterior is wrapped around minced and spiced veal as the filler. In some regions, bacon will be added between the flank steak and the veal grind.

All content from Kiddle encyclopedia articles (including the article images and facts) can be freely used under Attribution-ShareAlike license, unless stated otherwise. Cite this article:
London broil Facts for Kids. Kiddle Encyclopedia.