Football in Argentina facts for kids 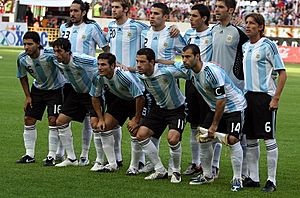 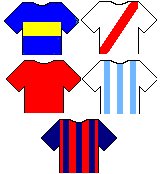 Football (or soccer in the U.S) is the most popular sport in Argentina. According to FIFA there are 2,658,811 players total; with 3,377 clubs and 37,161 officials. It is played from childhood into old age. 90% of Argentines say they have a favorite Argentine football club.

Football started in Argentina at the end of the 19th century. It was started by the British immigrants in Buenos Aires. The first Argentine league began in 1891. This makes it the third oldest league (after Great Britain and the Netherlands). The Argentine Football Association (AFA) was formed in 1893. It is the eighth oldest in the world.

The Argentine national team has won the football World Cup. They won in 1978 and 1986. They were runner-up in 1930 and 1990. They have also won the top continental tournament, the Copa América, fourteen times. The Argentina Olympic football team has won two Gold Medals. At club level, Argentine teams have won the most Intercontinental Cups (9) and the most Copa Libertadores (22).

Women's football has a national league since 1991. It is named the Campeonato de Fútbol Feminino. The female national representative qualified for the World Cup for the first time in 2007.

Argentina also compete in the beach football World Cup. Their best finish was third in 2001.

All content from Kiddle encyclopedia articles (including the article images and facts) can be freely used under Attribution-ShareAlike license, unless stated otherwise. Cite this article:
Football in Argentina Facts for Kids. Kiddle Encyclopedia.