The Intercontinental Cup was an international football competition. It was approved by the Union of European Football Associations (UEFA) and the Confederación Sudamericana de Fútbol (CONMEBOL). Teams from these confederations played against each other. It was usually the winners of the UEFA Champions League against the South American Copa Libertadores winners. It ran from 1960 to 2004. The FIFA Club World Cup replaced it. These cups ran at the same time from 2000 to 2004. The Intercontinal Cup was also known as European/South American Cup, or the Toyota Cup from 1980 to 2004. This was because they had an agreement with the car maker Toyota.

Between 1960 and 1979, the competition was two matches between the same teams. There was a playoff if the teams were level until 1968. After this date, there were penalty kicks instead. During the 1970s, the European teams were unsure about playing due to events in the 1969 final. Some European Cup-winning teams did not play. From 1980, the competition was a single match. The teams played in Japan. The sponsor was the multinational car maker Toyota. It gave a second trophy called the Toyota Cup. The organisation of the competition was then done by the Japan Football Association. UEFA and CONMEBOL continued to approve of the tournament.

The first winner of the cup was Spanish team Real Madrid. They beat Peñarol of Uruguay in 1960. The last winner was Portuguese team Porto. They beat Colombian team Once Caldas in a penalty shoot-out in 2004. The competition ended in 2004. It merged with the FIFA Club World Cup in 2005.

The competition trophy has the words "Coupe Européenne-Sudamericaine" ("European-South American Cup") at the top. At the bottom of the trophy, there is the round logo of UEFA and a map of South America in a circle.

During the sponsorship by Toyota, the competition gave a second trophy called the "Toyota Cup".

The performance of various clubs is shown in the following tables:

Man of the Match 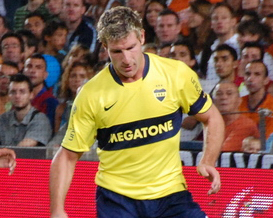 The man of the match was selected from 1980. Here is the list of the winners.

All content from Kiddle encyclopedia articles (including the article images and facts) can be freely used under Attribution-ShareAlike license, unless stated otherwise. Cite this article:
Intercontinental Cup (football) Facts for Kids. Kiddle Encyclopedia.