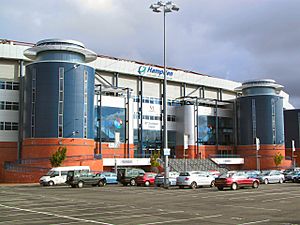 Hampden Park in Glasgow is Scotland's national football stadium. Its primary use is the home of Queen's Park F.C. and the Scotland national football team. It is also used for pop concerts and other sporting events.

Hampden was built in 1903, though all signs of the original stadium are long gone. It is known throughout the world as an iconic home of football and celebrated its centenary on October 31 2003. The stadium also houses the offices of the Scottish Football Association and the Scottish Professional Football League. During the 2012 Olympics it also hosted matches during the early stages of the Olympic football tournament. It has also hosted prestigious sporting events such as the finals of the European Cup (now the UEFA Champions League) and the UEFA Cup.

Hampden was the key stadium of the 2014 Commonwealth Games. It hosted the athletics during the tournament, Glasgow having been announced as the host city on 9 November 2007.

The Scottish Cup Final is played at Hampden annually in May, for the honour of lifting the world's oldest national trophy - the Scottish Football Association Challenge Cup, made in 1873. Queen's Park were the first winners, beating Clydesdale F.C. 2-0 in the 1874 final.

Hampden Park hosted the 1960 European Cup final between Real Madrid and Eintracht Frankfurt, where over 130,000 people watched Real Madrid win 7-3. The 1976 final was also held at Hampden, when FC Bayern Munich defeated AS Saint-Etienne. Real Madrid were again victorious when Hampden Park hosted the final of the UEFA Champions League in 2002, defeating Bayer Leverkusen, aided by Zinedine Zidane's legendary "wonder goal". Hampden Park also hosted the 2007 UEFA Cup Final on May 16 when Sevilla defeated Espanyol to retain the trophy. It also held famous wins for the Scotland national football team, such as the 1-0 wins over Netherlands in November 2003, and against France in October 2006. One of the most exciting Scottish Cup Finals in history commenced at Hampden on May 4 2002 as Rangers defeated Celtic 3-2 with a last-minute diving header from Peter Løvenkrands. Diego Maradona made his international debut at Hampden Park and scored.

Among the British and European capacity records Hampden holds are:

In American football, the Scottish Claymores of NFL Europe played at the stadium between 1998 and 2004 before decamping to Hamburg to become the Hamburg Sea Devils. The league's championship game, the World Bowl, was held there in 2003. In that game, the Frankfurt Galaxy beat Rhein Fire.

The stadium has also hosted concerts, and in 2000 was the venue for a boxing card headlined by former world champion Mike Tyson. Robbie Williams' concert in September 2006 forced the Scottish national team to play their first Euro 2008 qualifier at Celtic Park instead.

Hampden hosted the athletics events at the 2014 Commonwealth Games. Glasgow was announced as the host city on 9th November 2007.

All content from Kiddle encyclopedia articles (including the article images and facts) can be freely used under Attribution-ShareAlike license, unless stated otherwise. Cite this article:
Hampden Park Facts for Kids. Kiddle Encyclopedia.