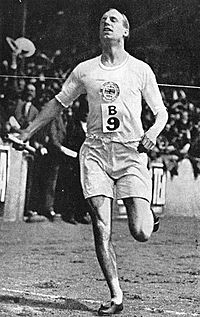 At the 1924 Summer Olympics in Paris, Liddell refused to run because they were held on a Sunday. Instead he competed in the 400 metres held on a weekday, a race that he won. He returned to China in 1925 to be a missionary teacher.

Liddell's Olympic training and racing, and the religious convictions that influenced him, are shown in the Oscar-winning 1981 movie Chariots of Fire, in which he is played by Ian Charleson.

Liddell died from brain cancer on 21 February 1945 at the Japanese run Weixian Internment Camp in Weifang at the age of 43.

All content from Kiddle encyclopedia articles (including the article images and facts) can be freely used under Attribution-ShareAlike license, unless stated otherwise. Cite this article:
Eric Liddell Facts for Kids. Kiddle Encyclopedia.