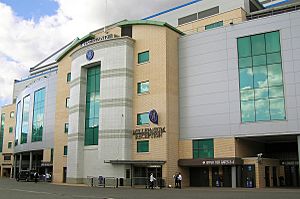 Stamford Bridge is the home of Premiership club Chelsea F.C.. It is in Fulham in southwest London and was built for Fulham Football Club, who turned it down, with Chelsea being created to play at the ground.It currently holds a capacity of 41,837 seats.

All content from Kiddle encyclopedia articles (including the article images and facts) can be freely used under Attribution-ShareAlike license, unless stated otherwise. Cite this article:
Stamford Bridge (stadium) Facts for Kids. Kiddle Encyclopedia.