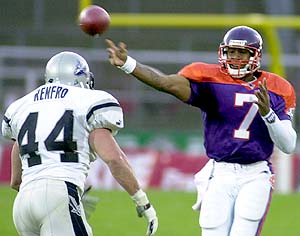 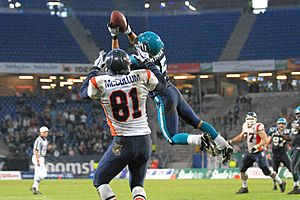 The NFL Europa was a European American football league that ran from 1991 to 2007 under the control of the National Football League. It started off as the World League of American Football and had 3 teams in Europe, 6 in the USA and one in Canada. After 2 years the league was put on hold, so there were no 1993 or 1994 seasons. The league came back in 1995 with the 3 original European teams plus 3 new ones. In 1998 the name of the league was changed to NFL Europe and then in 2007 it became NFL Europa. After the 2007 season it was decided to stop the league.

All content from Kiddle encyclopedia articles (including the article images and facts) can be freely used under Attribution-ShareAlike license, unless stated otherwise. Cite this article:
NFL Europa Facts for Kids. Kiddle Encyclopedia.