The Old Firm is the collective name for the Scottish football clubs Celtic and Rangers, which are both based in Glasgow. The two clubs are by far the most successful and popular in Scotland, and the rivalry between them has become deeply embedded in Scottish culture. It has reflected, and contributed to, political, social, and religious division and sectarianism in Scotland. As a result, the fixture has had an enduring appeal around the world.

Between them the two clubs have won 106 Scottish League championships (Rangers with 55 and Celtic with 51), 73 Scottish Cups (Celtic with 40 and Rangers with 33), and 46 Scottish League Cups (Rangers with 27 and Celtic with 19). Interruptions to their ascendancy have occurred rarely, most recently with the challenge of the New Firm of Aberdeen and Dundee United in the first half of the 1980s. Beginning with the 1985–86 season, one half of the Old Firm has won the Scottish League every season and in all but one of seventeen seasons between 1995–96 and 2011–12, both clubs finished in the top two places. In the early 2010s, Rangers endured financial difficulties, and its holding company was liquidated in 2012. Subsequently, the team had to apply for entry to the bottom (fourth) tier of the Scottish league, climbing to the top division in four seasons and winning the title again in 2020–21 (Celtic were champions in each of the intervening nine campaigns but failed to claim the tenth which would have beaten a record set by them in the 1960s/70s and matched by Rangers in the 1980s/90s).

Celtic and Rangers have played each other 426 times in major competitions: Rangers have won 167 matches, Celtic 159 matches, and 100 ended in a draw.

The clubs have large fan bases around Glasgow and Scotland and have supporters clubs in most towns throughout Scotland and Northern Ireland and in many cities around the world. In 2005 the presence of Rangers and Celtic was estimated to be worth £120 million to the Scottish economy each year. 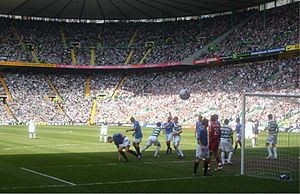 The Old Firm have a lot of history, possibly dating back to around 1888, Celtic's first match, which was against Rangers, when a newspaper report stated that both sets of players "got on so well that you would believe that they were old firm friends." However, William J. Murray states that the term comes from the commercial benefits of the two clubs' rivalry, which were viewed with distaste in some parts in the early days of the game

The two clubs are the most successful in Scotland, having won between them 63 Scottish Cups and 93 Scottish Premier League championships (as of 2007). The two clubs normally compete four times a year in the SPL and are regularly drawn against each other in the two Scottish cup competitions.

The clubs' have large support bases around Glasgow, but also have supporters clubs in most towns throughout Scotland and in many cities around the world. The presence of Rangers and Celtic has been estimated to be worth £120 million to the Scottish economy.

There have been many high profile players to play for both sides of the Old Firm. The most recent players to do so are Kenny Miller, Maurice Johnston, Steven Pressley, Mark Brown and Barry Robson. Kenny Miller is the first player in the modern era to cross the Old Firm divide twice, having played for Rangers then Celtic, then moving back to Rangers.

All content from Kiddle encyclopedia articles (including the article images and facts) can be freely used under Attribution-ShareAlike license, unless stated otherwise. Cite this article:
Old Firm Facts for Kids. Kiddle Encyclopedia.