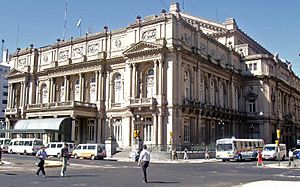 The Teatro Colón (Spanish) (Columbus Theatre) in Buenos Aires, Argentina, is one of the world's best known opera houses. In 2006 the theatre was closed so that work could be done to improve the inside of the building. It reopened in 2010

There had been a theatre there in the middle of the 19th century. The present building was opened in 1908. The auditorium is horseshoe-shaped and has 2,487 seats. The acoustics of the building are very good. It is in the middle of Buenos Aires.

Many world famous conductors, composers and singers have appeared at the theatre.

All content from Kiddle encyclopedia articles (including the article images and facts) can be freely used under Attribution-ShareAlike license, unless stated otherwise. Cite this article:
Teatro Colón Facts for Kids. Kiddle Encyclopedia.