Santiago del Estero is a province of Argentina. It is in the north of the country. The province is home to the Copo National Park. 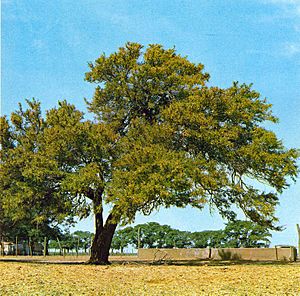 Mature algarrobo, a species nearly ubiquitous to the province.

The province is located almost completely in the flat lands of the Gran Chaco, with some depressions. In these depressions lagoons have formed, mainly at Bañado de Figueroa, Bañado de Añatuya, and those near the basin of the Salado and Dulce Rivers. The Sumampa and Ambargasta sierras are the result of the influence of the Pampas at the southwest.

The soil, rich in lime and salt, is arid and characterised by semi-deserts and steppes. The predominant weather is sub-tropical with a dry season and high temperatures during the entire year; the annual average is 21.5°C, increased to 24°C in the latest years, with maxima of up to 50°C, with visible increases in temperature since 1970. Surprisingly, the maximum was of 38°C before 1910; and minima of -5°C, which has increased to -2°C. The dry season, during the winter, receives an average of 120 mm of precipitation, but the annual average is 700 mm. 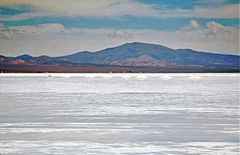 Salinas Grandes, one of the world's largest salt flats.

The economy of the province still leans toward primary production, specially in agriculture, about 12% of the province's output. Centred on the basins of the Salado and Dulce Rivers, the main crops include cotton (20% of the national production), soybean, maize and onion.

Cattle farming is also important, mainly in the east, where weather conditions make it possible, but goats, with 15% of the national production, adapt better to the rest of the province.

The wood industry of quebracho and algarrobo has also added implanted species totaling an annual average of over 300 thousand tons, of which around 100,000 tons are used for timber and the rest for firewood and vegetal coal.

There is little mining but in the salt flats in the southwest. Manufacturing (less than 10% of output) consists of small industrial enterprises centred mainly on food, textiles and leather.

Tourism is somewhat developed, but only around the main tourist attractions. Tourists visit Santiago del Estero (the oldest city in Argentina) and its historical buildings and museums, Termas de Río Hondo and the Río Hondo hot springs with its 200 hotels, and the Frontal dam where water sports are practiced.

All content from Kiddle encyclopedia articles (including the article images and facts) can be freely used under Attribution-ShareAlike license, unless stated otherwise. Cite this article:
Santiago del Estero Province Facts for Kids. Kiddle Encyclopedia.