San Juan is a province of Argentina. It is in the western part of the country. It borders with Chile at the west. The entire province has an important number of paleontological sites.

Agriculture is one of the most important economic activities, especially wine production and Olive oil. It is also an important center of mining and oil production. 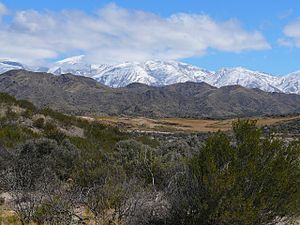 The Andes as seen from Estancia Maradona

The province is part of the continental semi-desert Cuyo region. The arid plains start on the east, with a few low hills in the middle and swiftly turn into 6,000-meter-high mountain peaks towards the west. Both areas are subject to the dry hot Zonda (a kind of foehn wind). Most of the precipitations take place during the summer, often as electrical storms.

The Jáchal and San Juan rivers, both part of Desaguadero River system, are the source of fertile valleys and centre of the province's economy. The San Juan River finishes in the Huanacache lagoons (sometimes called Guanacache), on the southeast.

The Andes of San Juan Province belong to the Dry Andes climatic province. Permafrost is widespread above 3000 masl in the Andes and rock glaciers are common.

All content from Kiddle encyclopedia articles (including the article images and facts) can be freely used under Attribution-ShareAlike license, unless stated otherwise. Cite this article:
San Juan Province, Argentina Facts for Kids. Kiddle Encyclopedia.