Salta is a province of Argentina, located in the northwest of the country. Neighboring provinces are from the east clockwise Formosa, Chaco, Santiago del Estero, Tucumán and Catamarca. It also surrounds Jujuy. To the north it borders Bolivia and Paraguay and to the west lies Chile.

Before the Spanish conquest, numerous native peoples (now called Diaguitas and Calchaquíes) lived in the valleys of what is now Salta Province; they formed many different tribes, the Quilmes and Humahuacas among them, which all shared the Cacán language. The Atacamas lived in the Puna, and the Wichís (Matacos), in the Chaco region.

The first conquistador to venture into the area was Diego de Almagro in 1535; he was followed by Diego de Rojas. Hernando de Lerma founded San Felipe de Lerma in 1582, following orders of the viceroy Francisco de Toledo, Count of Oropesa; the name of the city was soon changed to "San Felipe de Salta". By 1650, the city had around five hundred inhabitants. 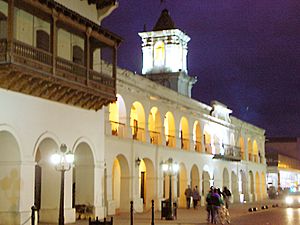 Colonial Cabildo in the city of Salta.

The battle of Salta in 1813 freed the territory from Spain, but occasional attacks were mounted from the Viceroyalty of Peru as late as 1826. Gervasio de Posadas created the Province of Salta in 1814, containing the current provinces of Salta, Jujuy, and parts of southern Bolivia and northern Chile.

Exploiting internal Argentine conflicts that arose after the Argentine Declaration of Independence, Bolivia annexed Tarija in 1826. In 1834, Jujuy withdrew from Salta and became a separate province. The borders of Salta were further reduced in 1900, with the loss of Yacuiba to Bolivia.

Antonio Alice's painting, La muerte de Güemes, which received a Gold Medal at the Centenary Exposition, is on display at the offices of the Salta Provincial Government. 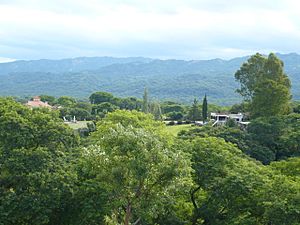 The total land area of the province is 155,488 km2 (60,034 sq mi), making it the sixth largest province by area in Argentina. The main rivers of the province are the Pilcomayo, Bermejo, and the Juramento, which later becomes the Salado River. Salta Province is located at a geologically active region, and suffers from occasional earthquakes. There have been four earthquakes of note in the province:

The 1692 earthquake was the inspiration for Salta's annual citywide festival, held on 16 September, in honor of El Señor y la Virgen del Milagro.

The province is located in the tropical zone and has a warm climate in general, though it has marked variation in climate types owing to the variation in altitudes. The orientation of the Andes influences the distribution of precipitation within the province.

The first slopes of the Andes force the moist, easterly winds to rise, provoking very high condensation leading to the formation of clouds that generate copious amounts of rain. The eastern slopes of the mountains receive between 1,000 to 1,500 mm (39 to 59 in) of precipitation a year, although some places receive up to 2,500 mm (98 in) of precipitation annually owing to orographic precipitation. Most of the precipitation is concentrated in the summer, with winters being dry. The high rainfall on these first slopes creates a thick jungle that extends in a narrow strip along these ranges, creating an area of great species diversity. At higher altitudes on these slopes, the climate is cooler and more humid, with the vegetation consisting of deciduous and pine trees.

Between the high altitudes to the west and the low plains to the east lie the valleys. The climate of these valleys is temperate, allowing for human settlement and agricultural activities. Mean annual precipitation is around 1,000 mm (39 in), most of it during summer. Mean temperatures exceed 20 °C (68.0 °F) during the summer, while during winter, they are below 14 °C (57.2 °F).

At the highest altitudes found in the western parts of the province, the climate is arid and cold, with large diurnal ranges (temperature range between day and night).

Manufacturing plays a significant role in Salta, adding 20% to the economy. Gas and petroleum from the Tartagal, Aguas Blancas, Madrejones and Campo Durán centres is transported to Buenos Aires and Rosario by pipes. There is also an oil refinery located at Campo Durán. Mining includes uranium at Iruya, La Poma and San Carlos.

Agriculture and its derived industries are still an important activity in the province, adding over 10% to output. Tobacco, sugar cane and viticulture are the most important and produce most of the exports from the area. Other crops mostly for local consumption are maize, beans, citrus, bananas, and tomatoes. The sugar cane is processed in plants in Salta before it is sent to the rest of Argentina and other countries. The plant in San Martín de Tabacal is the most important of them. The famous wines of the Valles Calchaquíes region (mainly Torrontés, Malbec and Cabernet Sauvignon) near Cafayate are produced in numerous vineyards of diverse sizes. American breeds of cattle are raised only on the humid subtropical east, along with some sheep and goats. 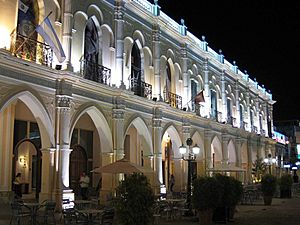 The Salta province is home to a number of natural, social and historic attractions.

The city La Linda ("The beautiful") is both an important tourist destination, and the centre point for visiting the rest of the province. The city holds different attractions; among them are its colonial houses and cathedral, and the Museo de Arqueología de Alta Montaña de Salta that holds the three frozen Inca mummies found at the Llullaillaco volcano and known as the Children of Llullaillaco .

The Tren a las Nubes ("Train to the Clouds") crosses canyons and cliffs before arriving at the 3,775 metres altitude (12,500 feet) of San Antonio de los Cobres. The red-rock formations of the Valles Calchaquíes and the wine-town of Cafayate are the second most visited place in the province. Many visit the Cachi mountains and the villages (such as Payogasta) around it.

The Train to the Clouds one of the highest railways in the world, taking its way across the high peaks of the Cordillera de los Andes, surrounded by striking sceneries.

All content from Kiddle encyclopedia articles (including the article images and facts) can be freely used under Attribution-ShareAlike license, unless stated otherwise. Cite this article:
Salta Province Facts for Kids. Kiddle Encyclopedia.