General Government (GG, Polish: Generalne Gubernatorstwo) is a term who refers to a region in central Poland. This region, after its annexation from the Nazi Germany in 1939, was declared semi-autonomous with local civil and military administration. Unlike Vidkun Quisling's Norway, it wasn't a puppet state. The local authorities were staffed with Germans faithful to National Socialism. 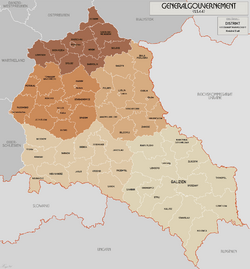 All content from Kiddle encyclopedia articles (including the article images and facts) can be freely used under Attribution-ShareAlike license, unless stated otherwise. Cite this article:
General Government Facts for Kids. Kiddle Encyclopedia.