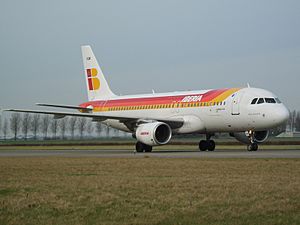 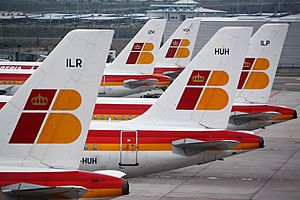 Iberia (Spanish: Iberia Líneas Aéreas) is the biggest airline in Spain. It is based in the Spanish capital city Madrid. It also operates many flights from Barcelona. Iberia also operates a smaller airline called Air Nostrum. That airline operates very short, so called 'regional' flights using the Iberia logo and colour scheme. It is also a member of Oneworld airline alliance.

Iberia has a fairly large fleet, all of which are Airbus planes:

Iberia flies to 46 countries in 5 continents. Most of their flights though are either to Europe or Spanish speaking countries in South America.

All content from Kiddle encyclopedia articles (including the article images and facts) can be freely used under Attribution-ShareAlike license, unless stated otherwise. Cite this article:
Iberia (airline) Facts for Kids. Kiddle Encyclopedia.