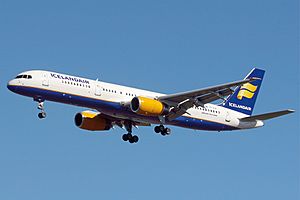 Icelandair is the national flag carrier of Iceland. They currently fly to 37 North American and European destinations with Boeing 757 or Boeing 767 aircraft.

Their main hub is at Keflavik International Airport in Reykjavik. 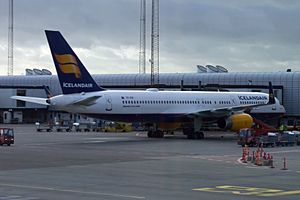 As of December 2016, Icelandair used an all-Boeing fleet. It was made up of the following aircraft:

All content from Kiddle encyclopedia articles (including the article images and facts) can be freely used under Attribution-ShareAlike license, unless stated otherwise. Cite this article:
Icelandair Facts for Kids. Kiddle Encyclopedia.