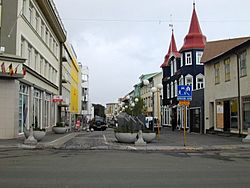 The town square in Akureyri.

Akureyri is a city in the northeast of Iceland. It is the second largest city in Iceland. It was founded in 1786. As of 2015, 18,191 people lived there. The mayor of Akureyri is Eiríkur Björn Björgvinsson.

All content from Kiddle encyclopedia articles (including the article images and facts) can be freely used under Attribution-ShareAlike license, unless stated otherwise. Cite this article:
Akureyri Facts for Kids. Kiddle Encyclopedia.