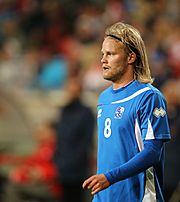 Bjarnason with Iceland in 2014.

Birkir Bjarnason (born on 27 May 1988 in Akureyri, Iceland) is an Icelandic professional footballer who plays as a central midfielder. He currently plays for the Swiss club of FC Basel and the Iceland national team. In his homeland he is nicknamed Thor.

He has also played for Viking FK, FK Bodø/Glimt, Standard Liège, Delfino Pescara 1936 and Sampdoria. He won the Swiss Super League with Basel in 2016.

He was included in Iceland's squad for the UEFA Euro 2016. On 14 June 2016, he scored Iceland's first goal at a major tournament. It was against Portugal, and the game ended in a draw.

All content from Kiddle encyclopedia articles (including the article images and facts) can be freely used under Attribution-ShareAlike license, unless stated otherwise. Cite this article:
Birkir Bjarnason Facts for Kids. Kiddle Encyclopedia.