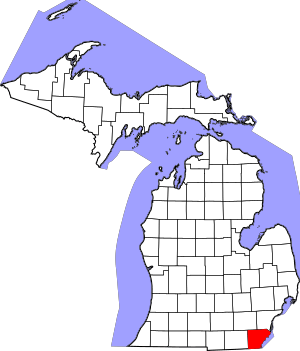 Location of Monroe County in Michigan

This is a list of the National Register of Historic Places listings in Monroe County, Michigan.

There are 17 individual listings on the National Register in the county: nine properties, five historic districts, and one bridge. These listings include a lighthouse, statue, four houses, trading post, former factory, battlefield (Battle of Frenchtown), and six historic districts — one of which is an undeveloped archeological district. Although attempts have been made to include other properties, only the following 16 are officially listed on the National Register of Historic Places. Nine of the listings are located within the county's largest city, Monroe. The first listed property was the Governor Robert McClelland House, which was added in 1971, and the most recent was the George Armstrong Custer Equestrian Monument, which was added in 1994. The oldest of all properties listed is the Navarre-Anderson Trading Post, which was first built in 1789. Settled in as early as 1780 and formally organized in 1817 as the second county in the Michigan Territory, Monroe County has a strong sense of historical preservationism.

All content from Kiddle encyclopedia articles (including the article images and facts) can be freely used under Attribution-ShareAlike license, unless stated otherwise. Cite this article:
National Register of Historic Places listings in Monroe County, Michigan Facts for Kids. Kiddle Encyclopedia.