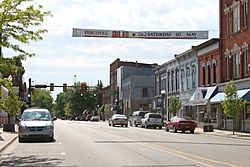 The city was founded in 1831 by John Marvin, Bethuel Hack, and Harmon Allen. Hack was the first postmaster, and he named the community "Farmer" since everyone there was a farmer. Drug store owner Henry Tolan took over as postmaster and renamed the community "Tolanville" after himself. Next, David Woodard became the post master, with the post office in his flour mill. He renamed the community "Woodard's Mills." The postmaster in Washington D.C. noticed the confusion caused by this swift change in names and decreed that it would henceforth be called "Milan" after the neighboring Milan Township. French settlers in the area named the township "Milan" because they once hoped to produce grapes and wine in the area, so the Italian city by that name seemed appropriate, given Italy's reputation for wine-making. The river going through Milan and Milan township is the Saline River, part of the River Raisin watershed. "River Raisin" refers to Raisin, the French word for grape. Small wild grapes were growing on the banks of the river, so early French settlers in the Monroe area hoped that this area would be wine country. Just southeast of Milan, along Plank road, is an old community by the name of "Grape" which is a reflection of this desire to create a wine producing area. Milan became a village in 1885. It continued as a village until 1967, when it was incorporated as a city.

There were 2,308 households of which 38.5% had children under the age of 18 living with them, 47.3% were married couples living together, 14.4% had a female householder with no husband present, 4.7% had a male householder with no wife present, and 33.6% were non-families. 27.8% of all households were made up of individuals and 8.9% had someone living alone who was 65 years of age or older. The average household size was 2.52 and the average family size was 3.10.

There were 1,923 households out of which 36.7% had children under the age of 18 living with them, 49.1% were married couples living together, 13.5% had a female householder with no husband present, and 33.9% were non-families. 28.0% of all households were made up of individuals and 10.1% had someone living alone who was 65 years of age or older. The average household size was 2.48 and the average family size was 3.04.

Communities in the immediate area

Mooreville is located about two miles west of Milan. It was founded in 1831 by William Moore; Moore purchased property in York Township in 1831 and created a home there for himself and his family. At one time Mooreville was a larger town than Milan, with a post office, flour mill, physician, cheese factory, and other amenities ahead of Milan's development. But in 1878 the Ann Arbor Railroad built a line through Milan, bypassing Mooreville; and in 1880 the Wabash Railroad did likewise. After that, Mooreville's population diminished, but it still has a cluster of homes there who identify themselves as residents of Mooreville. This community is a hamlet, never having attained the status of village. 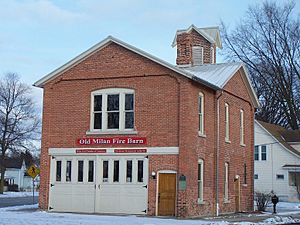 Turn-of-the-century, two-story homes are prevalent. Close to downtown, many homes have barns which once housed the family horse and carriage; the barns now shelter the family car. About one-quarter of the homes in Milan were built before World War II, and 21 percent built between 1940 and 1959. A symbol of the architecture is Community House, a two-story grist mill Henry Ford purchased in 1935. Ford had an engine coil manufacturing plant in an area which is now a parking lot between the police station and city hall. He had a soybean processing plant next to the former flour mill (now used for public works). Ford probably had the idea to make paint from soybeans, but the Milan plant did not make paint, just soybean oil. Area residents can utilize the Community House for small gatherings and it now houses the City Recreation Department dance studio.

Despite the increase in development, Milan is still equated with country living. There are working farms with cows and horses scattered in the surrounding area. A workshop for hand-built wooden organs is housed on East Main inside the city, in a relocated barn tucked along the Saline River. The small town began to develop its industrial base in the 1960s. Until recently, a great deal of its tax base was from the Visteon facility (Ford Motor Co.) Downtown Milan boasts a place on the National Register of Historic Places with fine examples of Italianate, International, Art Modern, and other architectural styles. One corner features a fully restored Fire Barn once used as a library, jail and as village hall over the years. It now houses the Chamber of Commerce office and Milan Area Historical Society meeting place.

Part of Milan's present City Hall is the former Ford Power Plant used for the Village industries. Henry Ford built the power plant in 1937 when he dredged Ford Lake. He also used a former lumber yard garage as a factory to make engine ignition coils. Ford intended his factory to depend upon hydraulic power, which is why he built a very fine dam to power his plant. Unfortunately, the water power was inadequate, and his "Ford Industries" actually ran on steam engines depending on coal.

Milan is known regionally for its Automobile Drag racing venue, the Milan Dragway even though it is actually in London Township.

Milan's own museum is the Hack House, built in 1888 by Olive Friend. She got her money for the home by a corporate scam in New York, the "Electric Sugar Refining Machine" company. After she moved out of the house, her cousin Jim Hack occupied it for generations, so the house is known in the Milan area as the "Hack House."

Home to one of the oldest family owned and operated automobile dealerships in Michigan, Schultz Motors was established in 1945 and is currently operated by the third generation of Schultz family members. The original dealership building still stands as the current Fire Station.

Schultz Bottled Gas is the oldest continuously family-owned retail business in Milan and has been family owned and operated 1939-2015. The families that own Schultz Motors and Schultz Bottled Gas are entirely different and not related to each other.

Chase Bank in Milan is descended from the Milan State Savings Bank which was founded in 1911 at the same location, on Wabash Street, and has been operating continuously under various names up to the present time.

All content from Kiddle encyclopedia articles (including the article images and facts) can be freely used under Attribution-ShareAlike license, unless stated otherwise. Cite this article:
Milan, Michigan Facts for Kids. Kiddle Encyclopedia.