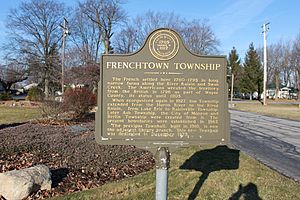 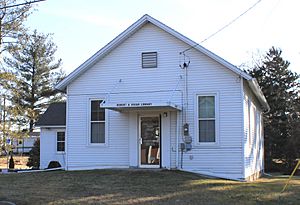 Frenchtown Charter Township is a charter township of Monroe County in the southeastern corner of the U.S. state of Michigan. The population was 20,428 at the 2010 census. Frenchtown is the second most-populated township in Monroe County after Bedford Township. The township has no incorporated cities or villages but numerous unincorporated areas; it  is bordered by the city of Monroe to the south, and the two jurisdictions are politically independent. Sterling State Park and the Enrico Fermi Nuclear Generating Station are located within the township.

This area was long occupied by Native Americans, including the historic Potawatomi. The Frenchtown area was settled by Europeans along the banks of the River Raisin in as early as 1784 by French Canadians, whose descendants are known as Muskrat French. Around the same time, the Sandy Creek Settlement was established near the main settlement of Frenchtown by Joseph Porlier Benec. This area became part of the United States after the Treaty of Paris (1783), specifically and sequentially part of the Northwest Territory (1787), Indiana Territory (1803), Michigan Territory (1805), and, finally, the State of Michigan (1837).

During the War of 1812, the area was the site of the Battle of Frenchtown, in which 397 Americans were killed by the British Army and Native American coalition; this was the highest number of American fatalities of any battle during the war. The battlefield site today is within the River Raisin National Battlefield Park, which was designated in 2009 and falls within the present-day city limits of Monroe.

That area of Frenchtown township was renamed and incorporated in 1817 as the village of Monroe in honor of then-President James Monroe's future visit to the Michigan Territory later that year. In the same year, the city of Monroe was named as the county seat of the newly created Monroe County. Monroe re-incorporated as a city in 1837. When that happened, the remaining area known as Frenchtown was reorganized as a township, encompassing much of the northern portion of the county — the area from the River Raisin to the Huron River at Wayne County's southern border. Shortly after, the northern portion of the township was broken off to form Ash Township and Berlin Charter Township by 1867. In addition to that, pieces of the southern portion of Frenchtown have been annexed by the city of Monroe on many occasions. Because of that, the boundary between the current Frenchtown Charter Township and the city limits of Monroe is jagged.

Interstate 75 passes through Frenchtown Charter Township, and the southern terminus of Interstate 275 is at Interstate 75 in the extreme northern portion of the township. U.S. Highway 24 (US 24, Telegraph Road) and M-125 (North Monroe Street) pass through the township as well.

Frenchtown Charter Township is served by one area code (734) and three zip codes: 48162, 48166, and 48117. The majority of the township is served by 48162 (which also serves a portion of the city of Monroe), while the area to the north near Newport falls into 48166. A very small portion in the northwest corner near the terminus of M-125 at US 24 is within 48117. No portion of Frenchtown Charter Township falls within 48161, used primarily for Monroe and Monroe Charter Township, as the boundary between 48161 and 48162 is the River Raisin; no portion of the township is south of the River Raisin.

There were 7,733 households out of which 35.9% had children under the age of 18 living with them, 56.1% were married couples living together, 11.0% had a female householder with no husband present, and 27.6% were non-families. 22.4% of all households were made up of individuals and 8.0% had someone living alone who was 65 years of age or older. The average household size was 2.65 and the average family size was 3.10.

All content from Kiddle encyclopedia articles (including the article images and facts) can be freely used under Attribution-ShareAlike license, unless stated otherwise. Cite this article:
Frenchtown Charter Township, Michigan Facts for Kids. Kiddle Encyclopedia.