Kids Encyclopedia Facts
Not to be confused with Lucas, Ohio.

Lucas County is a county located in the U.S. state of Ohio and bordered on the east by Lake Erie, and on the southeast by the Maumee River, which runs to the lake. As of the 2010 census, the population was 441,815. Its county seat is Toledo, located at the mouth of the Maumee River on the lake. The county was named for Robert Lucas, 12th governor of Ohio, in 1835 during his second term. Its establishment provoked the Toledo War conflict with the Michigan Territory, which claimed some of its area.

Lucas County is the central county of the Toledo Metropolitan Statistical Area.

On August 20, 1794, near the site of the present-day town of Maumee, American forces led by General Anthony Wayne won a decisive victory over allied Indian forces at the Battle of Fallen Timbers after years of conflict in what was known as the Northwest Indian War. The defeat of the Native forces resulted in the opening of the entire Northwest Territory for white settlement. Northwest Ohio was occupied chiefly by villages and bands of the Odawa people, who had trading relations with the French at Fort Detroit since 1701. Other Odawa were located in southeast Michigan and further north on the peninsula. They ceded much of that territory in the Treaty of Greenville but retained control of lands along the Maumee River until after the War of 1812. The last Odawa band, that of Ottokee, grandson of Chief Pontiac, left the Maumee River area for Kansas in 1839.

The disputed portion of Michigan Territory claimed by the state of Ohio known as the Toledo Strip.

Lucas County was established in 1835. At that time, both Ohio and Michigan Territory claimed sovereignty over a 468-square-mile (1,210 km2) region along their border (see Toledo War). When Michigan petitioned Congress for statehood in 1835, it sought to include the disputed territory within its bounds. In response, the Ohio General Assembly formally organized part of the area as Lucas County, naming it after the incumbent governor of Ohio, Robert Lucas. 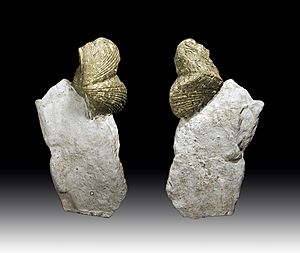 According to the U.S. Census Bureau, the county has a total area of 596 square miles (1,540 km2), of which 341 square miles (880 km2) is land and 255 square miles (660 km2) (43%) is water. It is the fourth-smallest county in Ohio by land area. Much of the county lies within what was at the time of its establishment, a vast network of forests, wetlands, and grasslands known as the Great Black Swamp. 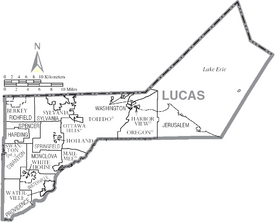 Map of Lucas County, Ohio with Municipal and Township labels

All content from Kiddle encyclopedia articles (including the article images and facts) can be freely used under Attribution-ShareAlike license, unless stated otherwise. Cite this article:
Lucas County, Ohio Facts for Kids. Kiddle Encyclopedia.