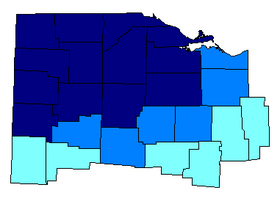 Northwest Ohio, or Northwestern Ohio, consists of multiple counties in the northwestern corner of the US state of Ohio. This area borders Lake Erie, Southeast Michigan, and northeastern Indiana. Some areas are also considered the Black Swamp area. The Toledo metropolitan area is part of the region.

Northwest Ohio's population in 2000 was 1,639,144 and is declining, specifically in the northern regions (counties shaded in the darker blue and Allen County). However, southern areas, such as Marion and Morrow Counties, and the City of Findlay are growing.

The city of Toledo serves as the principal city for the region of Northwest Ohio. Most of the region's television channels and radio stations are licensed in either Toledo, Perrysburg or nearby Bowling Green. Though Toledo is an industrial city, the region is primarily agriculture with relatively small centers of commerce in various locations. In recent years, Lucas County (i.e., Toledo, Sylvania, etc.) has seen a steep decline in population since 1970, whereas neighboring Wood County (i.e., Bowling Green, Perrysburg, etc.) and Hancock County (i.e., Findlay) have experienced modest, yet steady, growth.

Toledo is the region's principal and largest city 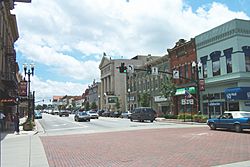 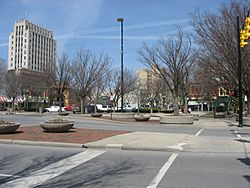 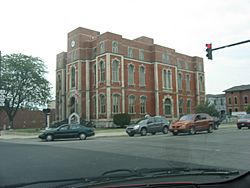 Defiance, Ohio is the seventh largest town in the region

These places are or may be classified as being in northwestern Ohio, depending on the definition being applied:

Other cities, villages, and townships

If a city is a county seat, it has been listed above according to the county in which it lies. Many of the cities, townships, and villages in northwest Ohio are clustered in the Toledo MSA. This list is incomplete. 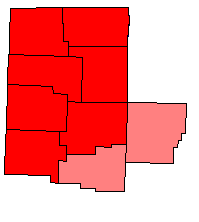 What is considered to be Extreme Northwest Ohio is shaded in red including the counties of Defiance, Fulton, Henry, Paulding, Putnam, Van Wert, and Williams. Allen and Hancock counties are sometimes included in the geographical area and are shaded in a lighter red.

Extreme Northwest Ohio, or Far N'western Ohio, is a portion of Northwest Ohio best known as the Great Black Swamp area due to its natural history. The counties of Defiance, Fulton, Henry, Paulding, Putnam, Van Wert, and Williams in the state of Ohio are usually classified as extreme northwest Ohio.

According to the 2000 Census, the population of this portion of NW Ohio is 234,660. When Allen and Hancock counties are included, the population is 414,428. Just like any other region, there is no universally agreed-upon line for northwestern Ohio, as the entire area is defined differently by the opinions of multiple people.

Toledo Express Airport (TOL), in suburban Swanton, is the largest airport in northwest Ohio. Toledo Express is served by seven major passenger airlines, and has been named one of the five best small airports in the Midwest. Toledo Express is also a major air cargo center, serving as the international hub for BAX Global. Toledo Express has begun a $22 million renovation project; As of 2007, the airport has expanded and renovated the central gate area of its single terminal, and is seeking an airline to offer direct service to New York City.

Toledo Express also hosts the corporate flight departments of Owens-Illinois, Owens-Corning, Pilkington, and Dana Holding Corporation. Grand Aire Express offers charter and air taxi services from its base at the airport. In education, the airport is a base of operations for FlightSafety International and Toledo Public Schools' aviation program, with flight instruction also offered by the airport's two fixed-base operators, who also provide fuel, repair, and storage for general aviation aircraft. Additionally, Toledo Express is a base for F-16 fighter jets of the Ohio Air National Guard, which has provided the airport additional funding for runway lengthening and safety enhancements.

Charter and air taxi service is also available at several smaller airports, such as Toledo Metcalf Field, Findlay Airport, and Lima Allen County Airport. General aviation users can also land at any one of approximately 40 public-use airports (both publicly and privately owned) in Northwest Ohio. 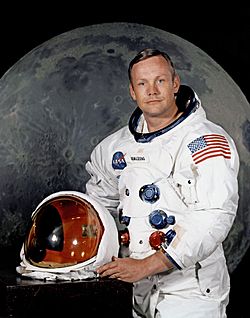 All content from Kiddle encyclopedia articles (including the article images and facts) can be freely used under Attribution-ShareAlike license, unless stated otherwise. Cite this article:
Northwest Ohio Facts for Kids. Kiddle Encyclopedia.