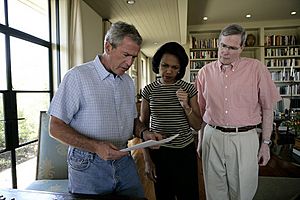 Hadley (right) discussing the 2006 Israel-Lebanon crisis with Bush and Rice.

Hadley served as a senior foreign and defense policy advisor to then-Governor Bush during the 2000 presidential campaign and worked in the Bush-Cheney Transition on the National Security Council.

All content from Kiddle encyclopedia articles (including the article images and facts) can be freely used under Attribution-ShareAlike license, unless stated otherwise. Cite this article:
Stephen Hadley Facts for Kids. Kiddle Encyclopedia.