Seneca County is a county located in the northwestern part of the U.S. state of Ohio. As of the 2020 census, the population was 55,069. Its county seat is Tiffin. The county was created in 1820 and organized in 1824. It is named for the Seneca Indians, the westernmost nation of the Iroquois Confederacy, which was based in present-day New York but had territory into Pennsylvania and Ohio.

The county was barely inhabited until the 1830s, but by 1860 its population had massively increased to about half the current number of inhabitants. It grew slowly thereafter, with periods of more marked increase towards the end of the 19th century, during the Great Depression and the post–World War II baby boom. In 1980 it was censused at 61,901, and has been declining since. Since about 2000, the county's population declines by about 100–300 persons annually, mainly due to a migration deficit of about 300 persons annually. This decline is projected to continue in the future.

Almost 80% of the county's total area is agricultural land. Some 10% is covered by forest, and the rest is mostly taken up by built-up areas and to a slightly lesser extent by pastureland.

The terrain of Seneca County is nearly level, gently sloping from about 290 meters ASL in the southeast to about 210 m ASL at the edge of the erstwhile Great Black Swamp in the northwest. Most of the county's area is located between 230 and 260 m ASL however. Almost the entire county belongs to the Sandusky River drainage basin; the river itself bisects the county from north to south slightly west of its middle, running through Tiffin as it does so. There is some steeper terrain along the rivers's course, formed by the occasional ravine of its tributaries.

Despite the presence of the Great Lakes which make for a somewhat milder climate in the region, Seneca County has a rather continental climate, namely after removal of the forests which once covered most of it upset the microclimate. Winters can be harsh, with plentiful snowfall due to lake-effect snow, and summers are often hot and sometimes oppressively humid, bordering on subtropical. The mostly featureless surface can result in rather extreme wind chill. In a 1906 description, the local climate was actually described as "rather unhealthful". 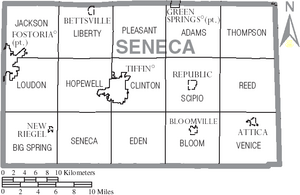 Map of Seneca County, Ohio With Municipal and Township Labels

Before widespread settlement, the area of Seneca County was for the most part woodland. Besides the fringe of the Great Black Swamp in the northwest, there was also an extensive area of marshland in the Bloomville area as well as smaller patches of swamp terrain which were formed due to the county's essentially level terrain. Native American inhabitants and later settlers used the region mainly for hunting fur animals, with little agriculture of note until the early 19th century.

Starting in the early-mid 19th century, the county's area was subject to wholesale deforestation. This led to massive alteration of much of the local wildlife, with grassland and farmland animals replacing the native woodland fauna. Migrant waterbirds, in ancient times commonly encountered throughout the region as they foraged in the swamps on their way south, are nowadays rare and concentrate on the few remaining waterbodies large enough to sustain them. The passenger pigeon (Ectopistes migratorius) had several roosting (and probably nesting) places in the county when it was still wooded. Removal of the forest had driven the birds away by the 1860s, foreshadowing its eventual total extinction due to large-scale logging which rendered this species unable to sustain the massive hunting pressure.

Landbirds were apparently less seriously affected; apart from the passenger pigeon, the ruffed grouse (Bonasa umbellus), wild turkey (Meleagris gallopavo), golden eagle (Aquila chrysaetos) and marsh wren (Cistothorus palustris) had essentially or completely disappeared by 1900. However, it is not known how many of the numerous species of New World warblers, most of which today only occur only as transient migrants, formerly bred in Seneca County.

The Eskimo curlew (Numenius borealis), possibly extinct today, occurred as a transient in Ohio until about 1900; to what extent it migrated through Seneca County is not well known but even if it did it is unlikely that it was often seen after deforestation had gotten underway in earnest. The extinct Carolina parakeet (Conuropsis carolinensis) – or probably individuals of the western subspecies, the Louisiana Parakeet (C. c. ludovicianus) – may have on occasion have occurred in Seneca County as a vagrant before 1862.

The only record of the long-billed murrelet (Brachyramphus perdix) in Ohio comes from Seneca County. A stray individual of this North Pacific auk was observed and photographed between November 12–18, 1996. The rare Kirtland's warbler (Setophaga kirtlandii) is again increasing in numbers and may occasionally range as far north as Seneca County.

The introduced house sparrow (Passer domesticus) is common since at least the late 19th century. The ring-necked pheasant (Phasianus colchicus), another species introduced from Europe, never seems to have become really plentiful, though it has been a breeding resident since at least 1901.

All content from Kiddle encyclopedia articles (including the article images and facts) can be freely used under Attribution-ShareAlike license, unless stated otherwise. Cite this article:
Seneca County, Ohio Facts for Kids. Kiddle Encyclopedia.