The Eskimo curlew (Numenius borealis), or the northern curlew, is a species of curlew in the family Scolopacidae. It was one of the most numerous shorebirds in the tundra of western Arctic Canada and Alaska, with approximately two million birds killed per year in the late 1800s. As there has not been a reliable sighting since 1987 or a confirmed sighting since 1963, the Eskimo curlew is now considered possibly extinct. The bird was about 30 cm (12 in) long and fed mostly on insects and berries. 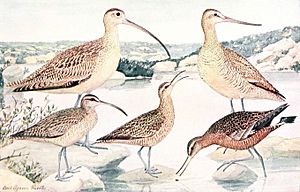 The Eskimo curlew is one of eight species of curlew, and is classed with them in the genus Numenius. It used to be placed in the separate genus Mesoscolopax. Numenius is classed in the family Scolopacidae. Other species in that family include woodcocks, phalaropes, snipes, and sandpipers. Scolopacidae is a Charadriiform lineage.

The species was described by Johann Reinhold Forster in 1772. The generic name has three possible etymologies. One is that it comes from the Greek "noumenios". "Noumenios" means "of the new moon", the thin beak of this curlew being compared to a thin crescent moon. A second possibility is that the genus name is derived from the word numen, meaning "nod", and referring to this species head being bent forward and down. The final possibility is that Numenius is a Latinized form of the Greek noumenios, which was the word Diogenes Laërtius used to refer to a species of curlew. The specific name "borealis" is Latin for "northern".

This species has many common names. It has been named the prairie pigeon, fute, little curlew, doe-bird, and doughbird. These last two names come from its fatness during early migration south. 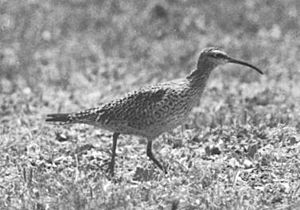 One of four known photographs of a living Eskimo curlew, taken by Don Bleitz on Galveston Island in 1962

Eskimo curlews are small curlews, about 30 centimeters in length, weighing approximately 360 g, and having a wingspan of 70 cm. Adults have long dark greyish legs and a long bill curved slightly downward. The upperparts are mottled brown and the underparts are light brown. They show cinnamon wing linings in flight. They are similar in appearance to the Hudsonian curlew, the American subspecies of the whimbrel, but smaller in size.

In the field, the only certain way to distinguish the Eskimo curlew is confirmation of its unbarred undersides of the primaries. The call is poorly understood, but includes clear whistling sounds.

The Eskimo curlew forms a species pair with the Asian little curlew, Numenius minutus, but is slightly larger, longer-winged, shorter legged, and warmer in plumage tone than its Asian relative. 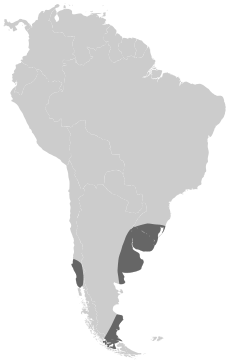 The Eskimo curlew was a New World bird. Members of this species bred on the tundra of western arctic Canada and Alaska.

Eskimo curlews migrated to the pampas of Argentina in the late summer and returned in February. They used to be very rare vagrants to western Europe, but there have been no recent records. In Britain, there are four records, all from the nineteenth century.

A comparison of dates and migratory patterns has led some to conjecture that Eskimo curlews and American golden plover are the shorebirds that attracted the attention of Christopher Columbus to nearby land after 65 days at sea and out of sight of land on his first voyage. In the 1800s, millions of Eskimo curlews followed migration routes from the present Yukon and Northwest Territories, flying east along the northern shore of Canada, then south over the Atlantic Ocean to South America in the winter. When returning to North America, they would fly north through the Great Plains. 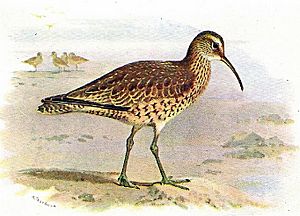 Eskimo curlews picked up food by sight, as well as feeding by probing. They ate mostly berries while on the fall migration in Canada. During the rest of their migration and on the breeding grounds, they ate insects. Snails and other invertebrates also were part of their diet during migration.

Nesting probably occurred in June. Nests were in open areas on the ground and are difficult to find. They were made of wisps of dried grass or leaves. The eggs were green with brown splotches.

The specific incubation behavior of this species is unknown. It is not certain which sex if not both incubated, nor what the specific timeline is. These birds evidently did not attack intruders approaching their nests, which provides reason to believe that their nests were far apart from each other. 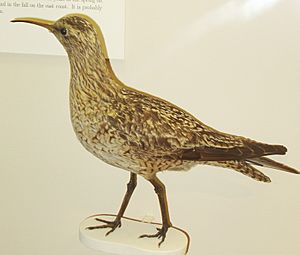 Specimen in the Museum of Comparative Zoology

At one time, the Eskimo curlew may have been one of the most numerous shorebirds in North America, with a population in the millions. As many as 2 million birds per year were killed near the end of the nineteenth century. The last confirmed sightings were in 1962 on Galveston Island, Texas (photographed) and on Barbados in 1963 (specimen). There was a reliable report of 23 birds in Texas in 1981, and a few dozen additional unconfirmed reports from the Northwest Territories, Texas, Ontario, Manitoba, Massachusetts, Alaska, Nova Scotia, Saskatchewan, Argentina, Guatemala, Labrador, New Jersey, and North Carolina between 1964 and 2006. No confirmed record of this species has been reported in South America since 1939. It has been suggested that the species not be treated as extinct until all possible remaining habitats have been surveyed and incidental sightings have ceased, and an assessment of critically endangered (possibly extinct) be adopted in the meantime. Full details on all sightings up to 1986 are included in the online edition of Eskimo Curlew: A Vanishing Species?

This species is fully protected in Argentina, Brazil, Canada, Mexico, and the United States. Hunting has been outlawed since around 1916.

All content from Kiddle encyclopedia articles (including the article images and facts) can be freely used under Attribution-ShareAlike license, unless stated otherwise. Cite this article:
Eskimo curlew Facts for Kids. Kiddle Encyclopedia.