The American golden plover (Pluvialis dominica), or American golden-plover is a medium-sized plover. The genus name is Latin and means relating to rain, from pluvia, "rain". It was believed that golden plovers flocked when rain was imminent. The species name dominica refers to Santo Domingo, now Hispaniola, in the West Indies.

The breeding adult American golden plover has a black face, neck, breast, and belly, with a white crown and nape that extends to the side of the breast. The back is mottled black and white with pale, gold spots. The breeding female is similar, but with less black. When in winter plumage, both sexes have grey-brown upperparts, pale grey-brown underparts, and a whitish eyebrow. The head is small, along with the bill.

The breeding habitat of American golden plover is Arctic tundra from northern Canada and Alaska. They nest on the ground in a dry open area. They are migratory and winter in southern South America. They follow an elliptical migration path; northbound birds pass through Central America about January–April and stage in great numbers in places like Illinois before their final push north. In fall, they take a more easterly route, flying mostly over the western Atlantic and Caribbean Sea to the wintering grounds in Patagonia. The bird has one of the longest known migratory routes of over 40,000 km (25,000 mi). Of this, 3,900 km (2,400 mi) is over open ocean where it cannot stop to feed or drink. It does this from body fat stores that it stocks up on prior to the flight. It is a regular vagrant to western Europe.

A comparison of dates and migratory patterns leads to the conclusion that Eskimo curlews and American golden plovers were the most likely shore birds to have attracted the attention of Christopher Columbus to the nearby Americas in early October 1492, after 65 days at sea out of sight of land. 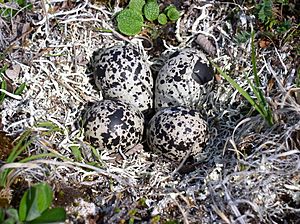 This bird uses scrape nests, lining them with lichens, grass, and leaves. At its breeding grounds, it is very territorial, displaying aggressively to neighbors. Some American plovers are also territorial in their wintering grounds.

The American golden plover lays a clutch of four white to buff eggs that are heavily blotched with both black and brown spots. The eggs generally measure around 48 by 33 millimetres (1.9 by 1.3 in). These eggs are incubated for a period of 26 to 27 days, with the male incubating during the day and the female during the night. The chicks then hatch precocial, leaving the nest within hours and feeding themselves within a day.

These birds forage for food on tundra, fields, beaches and tidal flats, usually by sight. They eat insects and crustaceans.

Large numbers were shot in the late 19th century and the population has never fully recovered.

All content from Kiddle encyclopedia articles (including the article images and facts) can be freely used under Attribution-ShareAlike license, unless stated otherwise. Cite this article:
American golden plover Facts for Kids. Kiddle Encyclopedia.