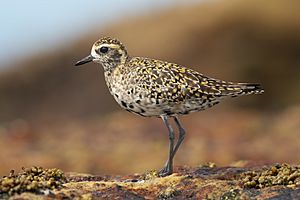 In transition from non-breeding to breeding plumage 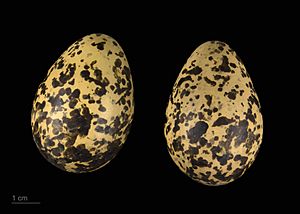 The 23–26 cm long breeding adult is spotted gold and black on the crown, and back on the wings. Its face and neck are black with a white border, and it has a black breast and a dark rump. The legs are black. In winter, the black is lost and the plover then has a yellowish face and breast, and white underparts.

This wader forages for food on tundra, fields, beaches and tidal flats, usually by sight. It eats insects and crustaceans and some berries.

The breeding habitat of Pacific golden plover is the Arctic tundra from northernmost Eurosiberia into western Alaska. It nests on the ground in a dry open area.

It is migratory and winters in south Asia and Australasia. A few winter in California and Hawaii, USA. In Hawaii, the bird is known as the kōlea, and in New Zealand it is known to Māori as kuriri. It is very rare vagrant to western Europe. They return to the same wintering territory each year, which allowed scientists in Hawaii to attach tiny light level geolocator devices to the birds and then retrieve them the following year in the same location. This research revealed that these birds make the 4800 km non-stop flight between Alaska and Hawaii in 3–4 days.

All content from Kiddle encyclopedia articles (including the article images and facts) can be freely used under Attribution-ShareAlike license, unless stated otherwise. Cite this article:
Pacific golden plover Facts for Kids. Kiddle Encyclopedia.