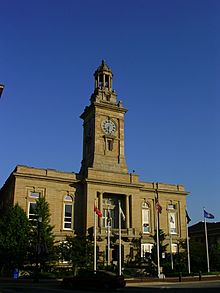 Norwalk is a city in and the county seat of Huron County, Ohio, United States. The population was 17,012 at the 2010 census. The city is the center of the Norwalk Micropolitan Statistical Area and part of the Cleveland-Akron-Canton Combined Statistical Area. Norwalk is located approximately 10 miles (16 km) south of Lake Erie, 51 miles (82 km) west/southwest of Cleveland, 59 miles (95 km) southeast of Toledo, and 87 miles (140 km) north/northeast of Columbus.

Norwalk is at the center of the Firelands, a subregion of the Connecticut Western Reserve. The subregion's name recalls the founding of the area as one for settlers from cities in Connecticut that were burned during the Revolutionary War. Several locations in the Firelands were named in honor of those cities, including Danbury, Greenwich, Groton, New Haven, New London, Norwalk, Norwich, and Ridgefield. Other locations were named for the settlers, including Clarksfield, Perkins, and Sherman.

On July 11, 1779, Norwalk, Connecticut, was burned by the British Tories under Governor Tryon. A committee of the General Assembly estimated the losses to the inhabitants at $116,238.66. Later, the federal government gave an area in the Western Reserve of Ohio as compensation for those established losses.

On May 30, 1800, the United States ceded the land titles to the "fire sufferers" and the representatives of the Reserve transferred the political jurisdiction to the general government. The Indian title was extinguished by treaty on July 4, 1805, on payment of $18,916.67; and in 1806, 13 men arrived to make the first survey of the Firelands.

On November 9, 1808, a group of prominent citizens from Ridgefield, Norwalk, New Haven, Greenwich, and Fairfield met at the courthouse in New Haven, Connecticut, as the Board of Directors of the Proprietors of the 500,000 acres (2,000 km2) of land lying south of Lake Erie, called the "Sufferers Land". They passed a resolution naming many of the townships in this area known as the "Firelands of Ohio".

Between 1806 and 1810, many families made the trip to look over land they had purchased in the "Firelands". During the War of 1812, because of the fear of British and Indian raids, settlement of the Huron County area came almost to a standstill. However, in 1815, Platt Benedict of Danbury, Connecticut, visited and examined the present site of Norwalk. He returned to Danbury and purchased 1,300 acres (5.3 km2) of land with an eye toward establishing a town.

In July 1817, Benedict returned to Norwalk with his family and immediately built a house. This was the first permanent residence established within the limits of Norwalk Village. In May 1818, the county seat was successfully removed from Avery, Ohio, to Norwalk, and by 1819 a census showed a population of 109 residents. Platt Benedict, the founder of Norwalk and its first mayor, died in 1866 at the age of 91. He is buried in Woodlawn Cemetery.

Among the earliest settlers of Norwalk were other men of wealth and education. They brought with them not only the customs, but also the architecture of New England. Many of their homes are still standing today.

In 1881, Norwalk's population reached the required minimum entitling her to incorporate as a city and the City of Norwalk dates from April 12, 1881.

According to the United States Census Bureau, the city has a total area of 9.15 square miles (23.70 km2), of which 8.87 square miles (22.97 km2) is land and 0.28 square miles (0.73 km2) is water. The city of Norwalk is bound by Norwalk Township in each direction and a small portion of the west side is bound by Ridgefield Township. The city is located approximately 12 miles (19 km) south of Lake Erie.

There were 6,764 households of which 34.0% had children under the age of 18 living with them, 45.1% were married couples living together, 14.8% had a female householder with no husband present, 5.0% had a male householder with no wife present, and 35.2% were non-families. 29.6% of all households were made up of individuals and 12.2% had someone living alone who was 65 years of age or older. The average household size was 2.46 and the average family size was 3.02.

There were 6,377 households of which 34.7% had children under the age of 18 living with them, 49.9% were married couples living together, 12.7% had a female householder with no husband present, and 33.6% were non-families. 28.5% of all households were made up of individuals and 11.9% had someone living alone who was 65 years of age or older. The average household size was 2.49 and the average family size was 3.06.

Interstate 80 and Interstate 90, also known as the Ohio Turnpike, are approximately 3.5 miles (5.6 km) north of Norwalk's city limits with an interchange at U.S. Route 250.

Furthermore, State Route 601 is an alternate two-lane highway that acts as a de facto eastern bypass of Norwalk and US 250, running from SR 113 at Milan to SR 18 southeast of Norwalk.

One active freight railroad line runs through Norwalk, the Wheeling and Lake Erie Railroad. Passenger rail service to New York City, Washington, DC, and Chicago is available at the Amtrak station in nearby Sandusky.

All content from Kiddle encyclopedia articles (including the article images and facts) can be freely used under Attribution-ShareAlike license, unless stated otherwise. Cite this article:
Norwalk, Ohio Facts for Kids. Kiddle Encyclopedia.