Kate Noelle Holmes (born December 18, 1978) is an American actress, producer, and director. She first achieved fame as Joey Potter on the television series Dawson's Creek (1998–2003). In June 2011, Holmes received the Women in Film Max Mara Face of the Future Award.

She made her feature film debut in Ang Lee's The Ice Storm in 1997. In 2008, she made her Broadway theatre debut in a production of Arthur Miller's All My Sons. In 2011, she played Jacqueline Kennedy in the TV miniseries The Kennedys, a role she reprised in The Kennedys: After Camelot (2017). She made her directorial debut with the 2016 film All We Had, in which she also starred.

Her marriage to actor Tom Cruise, which lasted from 2006 to 2012, led to a great deal of media attention, with the pair being called a supercouple and being given the nickname "TomKat" in various countries.

Holmes was born in Toledo, Ohio and is the youngest of five children. She graduated from the all-female Notre Dame Academy in Toledo, where she was a 4.0 student. At St. John's Jesuit and St. Francis de Sales, nearby all-male high schools, Holmes appeared in school musicals, playing a waitress in Hello, Dolly! and Lola in Damn Yankees. She scored 1310 out of 1600 on her SAT and was accepted to Columbia University.

At age 14, she began classes at a modeling school in Toledo which led her to the International Modeling and Talent Association (IMTA) Competition held in New York City in 1996. Eventually, Holmes was signed to an agent after performing a monologue from To Kill a Mockingbird. An audition tape was sent to the casting director for the 1997 film The Ice Storm and Holmes made her big-screen debut in the role of Libbets Casey in the film, opposite Kevin Kline and Sigourney Weaver. 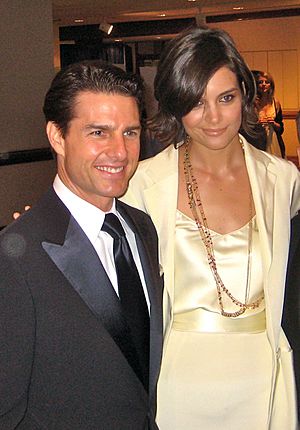 Holmes with Tom Cruise in May 2009

Holmes dated her Dawson's Creek co-star Joshua Jackson early in the show's run. She met actor Chris Klein in 2000. Klein and Holmes were engaged in late 2003, but in early 2005 she and Klein ended their relationship.

Holmes began dating actor Tom Cruise in 2005. Holmes, who was raised a Catholic, began studying Scientology shortly after the couple began dating. They got engaged in June 2005, only seven weeks after meeting. The couple's daughter, Suri, was born on April 18, 2006, the first anniversary of their first date.

On November 18, 2006, Holmes and Cruise were married in a Scientologist ceremony at the 15th-century Odescalchi Castle in Bracciano, Italy. The actors' publicist said the couple had "officialized" their marriage in Los Angeles the day before the Italian ceremony.

In early March 2011, Holmes filed a $50-million libel lawsuit against Star magazine following a cover story which insinuated that she took drugs. The suit was settled on April 27, 2011, after which Star wrote a public apology in the May 6, 2011 issue and made an "undisclosed substantial donation" to Holmes's charity, Dizzy Feet Foundation.

All content from Kiddle encyclopedia articles (including the article images and facts) can be freely used under Attribution-ShareAlike license, unless stated otherwise. Cite this article:
Katie Holmes Facts for Kids. Kiddle Encyclopedia.