Jamie Farr (born Jameel Joseph Farah; July 1, 1934) is an American television, film, and theatre actor. He is of Lebanese descent. He is known for playing corporal (later sergeant) from Toledo, Ohio in the role of Maxwell Q. Klinger in the CBS television sitcom M*A*S*H. As of December 31, 2016, Farr is currently the oldest surviving cast member of M*A*S*H. 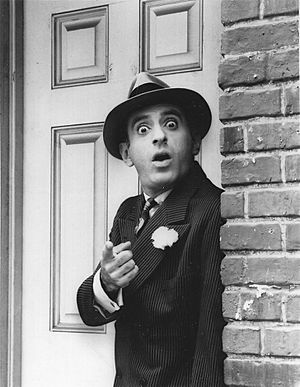 Jamie Farr in a promotional photograph 1971

Farr was born in Toledo, Ohio, to Lebanese-American parents. Farr's first acting success occurred at age 11, when he won two dollars in a local acting contest. After Woodward High School, where he was one of the standouts among his class, Farr attended the Pasadena Playhouse, where a Metro-Goldwyn-Mayer talent scout discovered him, offering him a screen test. He won the role and with the encouragement of his mentor he decided to become an actor. 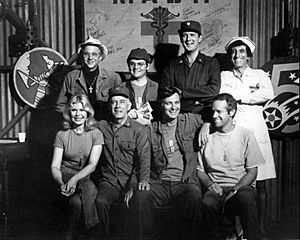 Farr's first film roles were in 1955. He appeared as a student in The Blackboard Jungle (billed as Jameel Farah) and as a fruit vendor in Kismet (uncredited).

Although Farr was off to a promising start, roles were infrequent for the young actor, and he took jobs as a delivery person, a post office clerk, an army surplus store clerk, an airlines reservations agent and as an employee at a chinchilla ranch. Farr began to carve his niche in television when, in the late 1950s, he became a regular on The Red Skelton Show. Farr also appeared on The Dick Van Dyke Show and was a regular on The Chicago Teddy Bears before being asked to play the role of "Corporal Klinger" on M*A*S*H.

He was hired for one day's work as "Corporal Klinger" on the M*A*S*H episode "Chief Surgeon Who?" and he played it so well that this day job became an eleven year career. His character wore dresses to try and convince the army that he was crazy and he deserved a Section 8 discharge. He was asked back for a dozen episodes in the second season and he became a regular in the third.

After the enormously successful comedy finished its eleven year run, Farr and co-stars Harry Morgan and William Christopher spent two years starring in AfterMASH, the sequel that explored how civilian life treated their characters. While working on M*A*S*H, Farr found time to do some work on the silver screen. He also appeared in several made-for-TV movies.

Farr endorsed the U.S. Mars bar in commercials during the 1980s and received a Star on the Hollywood Walk of Fame in 1985. He is still active in regional theater and guest stars occasionally on different TV series. Since 1984, he has hosted an annual women's professional golf tournament on the LPGA tour, the Jamie Farr Owens Corning Classic in northwest Ohio. The tournament has raised over $4.8 million for local children's charities. 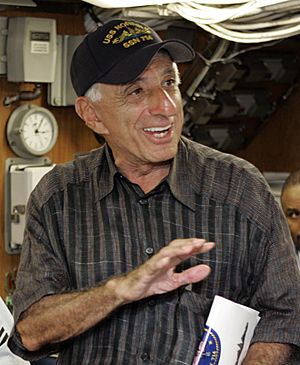 Farr's autobiography is titled Just Farr Fun. After his role in the 1955 film Blackboard Jungle, he entered the United States Army for two years, serving overseas in Japan and Korea. His service in Korea was after the hostilities had ended. In his M*A*S*H role as Max Klinger, he can be seen wearing his actual issued set of U.S. Army dog tags.

The park in Toledo where Farr used to hang out when he was younger was renamed "Jamie Farr Park" in his honor on July 5, 1998. About the park, he said, "I wanted to be an actor, a famous actor, and I wanted my hometown of Toledo, Ohio, to be proud of me." Farr spoke to about four hundred admirers and was quoted in the New York Post: "Jamie Farr Park is certainly a highlight of my life and career."

Further exemplifying Farr's love of Toledo was his frequent mention of Tony Packo's hot dogs, a Toledo staple, on M*A*S*H. He also was shown in many episodes as a Toledo Mud Hens fan.

Farr has been married to Joy Ann Richards since 1963 and has two children. In 2003, Farr and his wife wrote a children's story called Hababy's Christmas Eve, which retells the First Christmas from the point of view of the animals.

All content from Kiddle encyclopedia articles (including the article images and facts) can be freely used under Attribution-ShareAlike license, unless stated otherwise. Cite this article:
Jamie Farr Facts for Kids. Kiddle Encyclopedia.