James "Jabby" Jabara (10 October 1923 – 17 November 1966) was the first American and United States Air Force jet ace in history. Born in Oklahoma, he lived in Kansas where he enlisted as an aviation cadet at Fort Riley after graduating from high school. Jabara attended four flying schools in Texas before he received his pilot's wings and was commissioned as a second lieutenant. Jabara flew two tours of combat duty in Europe during World War II as a North American P-51 Mustang pilot, and scored 1.5 air victories against German aircraft.

Jabara flew his first jet aircraft in 1948, the USAF Lockheed F-80 Shooting Star before transitioning to the USAF North American F-86 Sabre. Jabara used this aircraft to shoot down multiple Soviet-built MiG-15 jets during the Korean War. He achieved his first confirmed air victory of the war on 3 April 1951. A month later he scored his fifth and sixth victories, making him the first American jet ace in history. He eventually scored 15 victories, giving him the title of "triple ace". 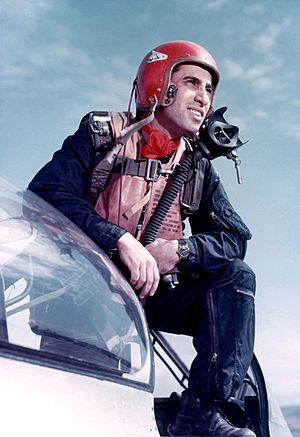 Jabara joined the Boy Scouts, eventually becoming an Eagle Scout. At an early age, he was set on becoming a pilot. He worked at his parents' grocery store and graduated from Wichita North High School in Wichita, Kansas in May 1942. Standing five feet, five inches (165 cm) tall, Jabara was short for a potential fighter pilot (and was reportedly required to wear corrective eyewear), but this did not prevent him from immediately enlisting as an aviation cadet of the United States Army Air Corps at Fort Riley, Kansas. In an attempt to improve his eyesight for flying, he ate 20 carrots a day in the mistaken belief that this would improve his vision. After attending four flying schools in Texas, he received his pilot's wings and a commission as second lieutenant at Moore Field, Texas in October 1943.

In 1966, while on leave from service in Vietnam, Colonel Jabara was traveling with his family in two cars to their new home when the car he was travelling in crashed and he was fatally injured. He was buried at Arlington National Cemetery. In recognition of his contributions to military aviation, an airport outside of Wichita, Kansas was named in his honor. Each year the United States Air Force Academy alumni association bestows the Jabara Award upon an Academy graduate whose aerospace accomplishments demonstrate superior performance.

All content from Kiddle encyclopedia articles (including the article images and facts) can be freely used under Attribution-ShareAlike license, unless stated otherwise. Cite this article:
James Jabara Facts for Kids. Kiddle Encyclopedia.