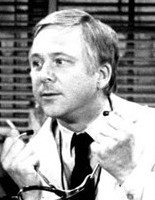 Christopher was born in Evanston, Illinois. He studied at Wesleyan University. His wife was Barbara O'Connor; together they wrote a book, Mixed Blessings, about their experiences raising their autistic son. He retired in 2012.

All content from Kiddle encyclopedia articles (including the article images and facts) can be freely used under Attribution-ShareAlike license, unless stated otherwise. Cite this article:
William Christopher Facts for Kids. Kiddle Encyclopedia.