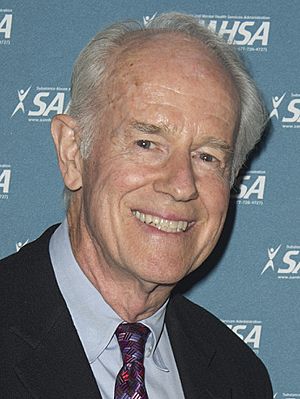 Farrell was born in St. Paul, Minnesota. He was raised in Hollywood, California. He was part of the United States Marine Corps. Farrell was married to Judy Hayden from 1963 until they divorced in 1983. Then, he married Shelley Fabares in 1984. He has two children with Hayden.

Farrell is also an activist for various causes, including animal rights and world peace. He was Vice President of the Screen Actors Guild.

All content from Kiddle encyclopedia articles (including the article images and facts) can be freely used under Attribution-ShareAlike license, unless stated otherwise. Cite this article:
Mike Farrell Facts for Kids. Kiddle Encyclopedia.