Cruelty to animals facts for kids 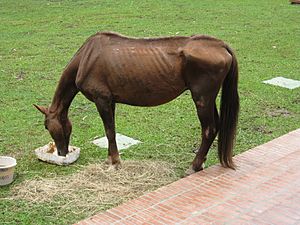 A malnourished horse eating at a veterinary clinic 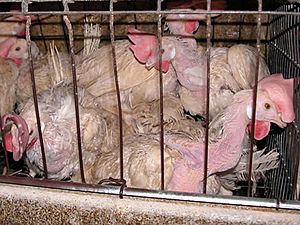 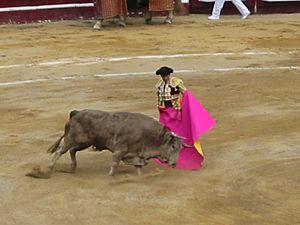 A bull fight in Bogotá, a legacy of Spanish culture. The practice of bullfighting is criticized by numerous organizations in Colombia. It remains legal in the country 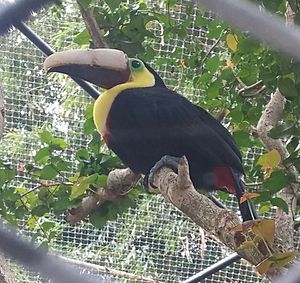 Cruelty to animals refers to treatment or standards of care that cause unwarranted or unnecessary suffering or harm to animals.

Sometimes if someone harms animals they get a fine and in more serious cases can go to jail.

Some ways people could abuse an animal would be locking it up, keeping it tied to a chain, giving it little or no food or water, kicking and hurting it, yelling and scaring it or leaving it outside in cold or hot weather for a long period of time.

Some people say that factory farming, fur farming or animal testing is also cruel to an animal's welfare.

Many countries around the world have laws which forbid cruelty to some animals. These laws provide the minimal requirements for care and treatment of animals, but do not require optimal treatment or mandate kindness or love. They require that animals be provided shelter, food, water and medical treatment and that animals not be tortured, or killed in an inhumane manner.

Some traditional practices, such as the treatment of animals at a rodeo or at a circus, are sometimes given exemptions to the laws.

In a few jurisdictions, notably Massachusetts and New York, agents of humane societies and associations may be appointed as special officers to enforce statutes outlawing animal cruelty.

In the USA ear cropping, tail docking, the Geier Hitch, rodeo sports and other acts perceived as cruelty in many other countries are still allowed. Penalties for cruelty are minimal, if pursued.

In Australia, many states have enacted legislation outlawing cruelty to animals. Whilst the police deal with criminal matters, in many states officers of the RSPCA and other animal welfare charities are given authority to investigate and prosecute animal cruelty offences.

Most jurisdictions simply depend on law enforcement officers who may not be knowledgeable in the area or assign it a high priority.

In the United Kingdom, cruelty to animals is a criminal offence and one may be fined or jailed for it for up to five years.

In Mexico, animal cruelty laws are slowly being implemented.

All content from Kiddle encyclopedia articles (including the article images and facts) can be freely used under Attribution-ShareAlike license, unless stated otherwise. Cite this article:
Cruelty to animals Facts for Kids. Kiddle Encyclopedia.