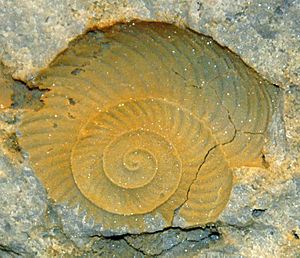 Mercer County is located in the U.S. state of Ohio. As of the 2020 census, the population was 42,528. Its county seat is Celina. The county was created in 1820 and later organized in 1824. It is named for Hugh Mercer, an officer in the American Revolutionary War.

In the mid to late 1800s Mercer county became home to many German immigrants, most of whom became farmers in the new world. Many of these German immigrants migrated from northwestern Germany.

According to the U.S. Census Bureau, the county has a total area of 473 square miles (1,230 km2), of which 462 square miles (1,200 km2) is land and 11 square miles (28 km2) (2.3%) is water. The entire county has an elevation difference of less than 300 feet. The highest point is on the southern county line at 1071 feet above sea level. This is in proximity to the head waters for the Wabash River. The lowest point in the county is 780 feet above sea level. This point is located on the northern county line where the St. Marys River crosses over.

Beaver Creek is the longest and largest creek in Mercer County. It stretches 19.7 miles and has two sections. The first section begins in southern farmland in the county and flows through the town of Montezuma, Ohio and into Grand Lake St. Marys. The other section of the creek begins as a spillway and empties into the Wabash River. Beaver Creek was originally one piece, but was split into two sections after the construction of Grand Lake. The creeks' spillway, and last section, has been the subject of controversy and multimillion-dollar lawsuits. Farmers along Beaver Creek claim their land floods because of the spillway that was put up in 1997, replacing the previous spillway, built in 1913. 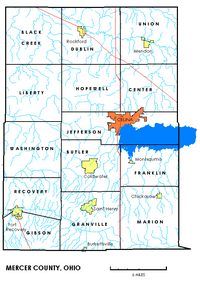 All content from Kiddle encyclopedia articles (including the article images and facts) can be freely used under Attribution-ShareAlike license, unless stated otherwise. Cite this article:
Mercer County, Ohio Facts for Kids. Kiddle Encyclopedia.