Rockford is a village in Mercer County, Ohio, United States. The village is on the St. Mary's River near the center of the western Ohio border 12 miles Northwest of Celina. The population was 1,120 at the 2010 census.

The village was founded in 1815 by French-Indian trader Anthony Madore, and was originally named Shanesville. 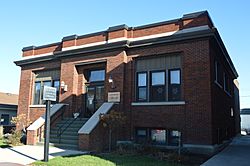 Deep into remote times dip the history of what once was Shanesville, later Shane's Crossing, and last by Post Office Department decree, Rockford. This community is rich in lore and legend.

There is no doubt that the high ground adjacent to the St. Marys River at Rockford served as a camping ground and village site for Native American tribes long before Columbus discovered America. Weapons, tools, arrow heads and stone axes tell of long occupancy.

From time immemorial the St. Marys River has been a busy thoroughfare for traders, trappers, and adventurers. Trails along the banks of the rivers were used greatly, one of these became known as the Piqua-Fort Wayne Trail, which crossed to the north side of the river here, a part of the journey from the Great Lakes to the Ohio River.

The earliest records of the history of Rockford and community, begins with that of Anthony Madore, a French-Indian who ran a trading post located just north of the Junction of Routes 118 and 33, and east of the Rockford American Legion home. It is not known how long Madore owned the post, but he died around 1815.

A few years before this period were the bloody Indian Wars. The Miamis and the Shawnees and other tribes were then entrenched in their stronghold at Fort Wayne. General Josiah Harmar and his army went through Rockford en route to Fort Wayne where he was more or less defeated.

This bloodshed went on unchecked until General Anthony Wayne came on the scene. After mopping up at Fort Recovery, he built a stockade which was unsuccessfully stormed by the Indians. He made his way diagonally across Mercer County to the St. Marys where he built Fort Adams, a temporary relay station and supply depot, east of U.S. Route 127, North of Mercer. Wayne and his army dealt the Indians many defeats.

During the War of 1812, Rockford heard martial music. General William Henry Harrison camped here with his army en route to Detroit to fight the British and their Indian allies. He was joined at Rockford by 200 mounted Ohio volunteers and 800 foot soldiers. The Indians who were besieging the garrison at Fort Wayne fled when Harrison's army approached. When Tecumseh, the famous Indian warrior was killed in a duel with Col. Richard M. Johnson at the Battle of Thames, this almost ended the War of 1812 in this country.

Anthony Shane, a French-Indian and his wife lived for years in a double-log cabin, just north of the town now named Rockford. He ran a trading post and for his services as a scout for the army of General Anthony Wayne was given a large tract of land known as the Shanes Grant, and all abstracts of title for royalty here start with this grant. The grant consisted of 640 acres (2.6 km2) north of the town and 320 acres (1.3 km2) at the town site.

On June 23, 1820, Shane filed his plot to the town of Shanesville which then comprised 42 lots on the south side of the river. Shane lived here until 1832 when he acted as a government agent and accompanied the Shawnee Indians to Kansas. It is not known if he ever returned to this part of the country.

There were 454 households, of which 30.4% had children under the age of 18 living with them, 48.5% were married couples living together, 14.5% had a female householder with no husband present, 3.3% had a male householder with no wife present, and 33.7% were non-families. 29.3% of all households were made up of individuals, and 14.5% had someone living alone who was 65 years of age or older. The average household size was 2.41 and the average family size was 2.96.

All content from Kiddle encyclopedia articles (including the article images and facts) can be freely used under Attribution-ShareAlike license, unless stated otherwise. Cite this article:
Rockford, Ohio Facts for Kids. Kiddle Encyclopedia.