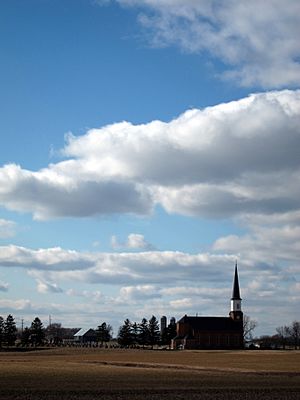 Carthagena was laid out in 1840. It is named after Cartagena, a city in the south-east of Spain. The village was started by Charles Moore from Harrison County, Kentucky around the same time Mercer County was established. Charles Moore was a black man and owned 160 acres of land in Carthagena. Black people lived in Carthagena for over 100 years, the last known member of the black community in Carthagena was Albert Bowles who died in 1957 and is buried in the black cemetery there. The land a black school stood on (Emlen Institute) was purchased by the Missionaries of the Precious Blood (C.P.P.S.) for $4500 on March 14, 1861. A seminary was built and named "Saint Charles Seminary". The Saint Charles Center has been operated by the Missionaries of the Precious Blood since then.

All content from Kiddle encyclopedia articles (including the article images and facts) can be freely used under Attribution-ShareAlike license, unless stated otherwise. Cite this article:
Carthagena, Ohio Facts for Kids. Kiddle Encyclopedia.