Kids Encyclopedia Facts
Not to be confused with Shelby, Ohio.

Shelby County is a county in the northwestern portion of the U.S. state of Ohio. As of the 2020 United States Census, the population was 48,230. Its county seat is Sidney. Its name honors Isaac Shelby, first governor of Kentucky.

The Algonquian-speaking Shawnee Native Americans had come into the area in the 18th century, displacing the Ojibwa-speaking Ottawa of the Anishinaabeg, a related language group who moved northwest. The Shawnee were joined by the Iroquois, Seneca and Mingo peoples as well, displaced by colonial encroachment to the east. In 1792 the European-American pioneer John Hardin was killed by the Shawnee in Shelby County. Early settlers named the first county seat of Hardin after him.

Shelby County was created in 1819 from Miami County. For many years it contained Minster, New Bremen, etc.; these were included in Auglaize County when it was created from Shelby and Allen counties.

In 1846, a group of 383 free blacks from Virginia, called the "Randolph Slaves", settled in the county, most at Rumley. They had been freed by the 1833 will of the Virginia planter John Randolph of Roanoke. He provided money for their transportation and resettlement on land in a free state. Their gaining freedom was delayed by court challenges to Randolph's will, but the families were freed and traveled in 1846. Randolph had provided that those over the age of 40 were given 10 acres each for resettlement. A contemporary history described Rumley in the following way: "There are 400 Negroes (half the population of Van Buren Township) as prosperous as their white neighbors and equal to the whites in morals, religion and intelligence."

In 1900 survivors and descendants formed the Randolph Ex-Slaves Association (later they changed the name to the Randolph Slave Association) and held their first reunion at Midway Park near Piqua. Sixty-two of the original settlers attended who had been born in Virginia into slavery. After being manumitted, they had come to Ohio as small children with their families. They were called the "Old Dominions" after the nickname of Virginia; the "Buckeyes" were those descendants born in Ohio. Over the years, the reunions were also held at Troy and the Shelby County Fairgrounds, with 100-300 attending. 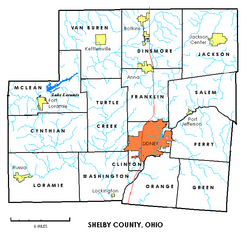 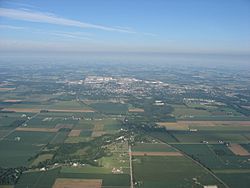 Sidney as seen from the east

All content from Kiddle encyclopedia articles (including the article images and facts) can be freely used under Attribution-ShareAlike license, unless stated otherwise. Cite this article:
Shelby County, Ohio Facts for Kids. Kiddle Encyclopedia.