Troy is a city in and the county seat of Miami County, Ohio, United States, located 19 miles (31 km) north of Dayton. The population was 25,058 at the 2010 census, making it the largest city in Miami County and the 61st largest city in Ohio; it is part of the Dayton Metropolitan Statistical Area. Troy is home to an annual Strawberry Festival the first weekend in June.

Troy was one of the cities impacted by severe flooding in the Great Flood of 1913. 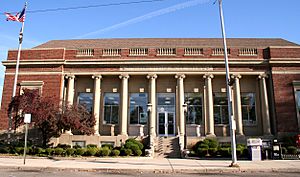 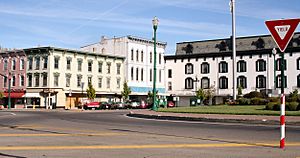 On August 30, 2013 Mumford & Sons had a concert in the Troy High School football stadium for their Gentlemen of the Road Stopover tour. 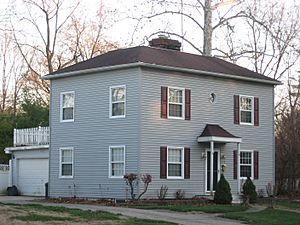 The city was the location of the Hobart Welded Steel House Company, which might have become influential in U.S. housing, if pre-fabricated houses had succeeded in becoming popular after World War II. The firms' homes are similar to those of the more well-known Lustron houses of the Columbus, Ohio-based Lustron Corporation (which also failed). The Hobart firm manufactured and built 22 homes, all in Troy, 16 of which survive and are listed on the U.S. National Register of Historic Places. 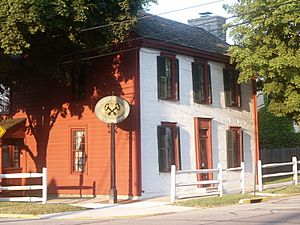 1808 Overfield Tavern, one of Ohio's oldest taverns, now a museum

Other NRHP-listed properties in Troy include four unrelated homes, a tavern, the Miami County Courthouse and Power Station, the 1859 First Presbyterian Church, and the Troy Public Square.

Troy has a public library, a branch of the Troy-Miami County Public Library.

All content from Kiddle encyclopedia articles (including the article images and facts) can be freely used under Attribution-ShareAlike license, unless stated otherwise. Cite this article:
Troy, Ohio Facts for Kids. Kiddle Encyclopedia.