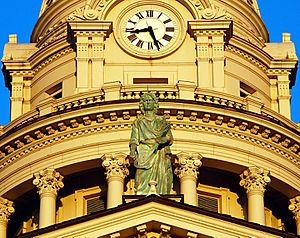 Detail of the clock and the statue of Justice

The Miami County Courthouse is an historic building in Troy, Ohio, United States. Built in 1885, it was designed by noted Ohio (and later New York) architect Joseph W. Yost, who also designed the similar Belmont County Courthouse built at the same time in St. Clairsville. It has high arched windows and Corinthian columns supporting the outthrust corners and main entrance. A flight of stairs runs to the main entrance. The central pediment rests on an arch supported by Corinthian columns. The corners of the building thrust out and support a pediment, on top of each rests a tower crowned with an urn-shaped finial. A central tower rises from the middle of the building supporting the clock tower and dome, a statue of justice stand at the very top.

On May 30, 1975, the courthouse along with the power station to the north were added to the National Register of Historic Places as the Miami County Courthouse and Power Station.

All content from Kiddle encyclopedia articles (including the article images and facts) can be freely used under Attribution-ShareAlike license, unless stated otherwise. Cite this article:
Miami County Courthouse (Ohio) Facts for Kids. Kiddle Encyclopedia.