Kids Encyclopedia Facts
Not to be confused with Shelby County, Ohio.

Shelby is a city in Richland County in the U.S. state of Ohio, northwest of the city of Mansfield. It is part of the Mansfield, Ohio Metropolitan Statistical Area. The population was 9,317 as of the 2010 census. 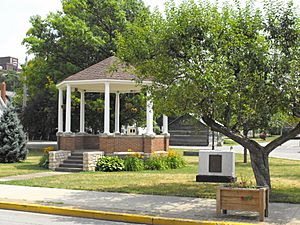 According to the United States Census Bureau, the city has a total area of 6.49 square miles (16.81 km2), of which 6.35 square miles (16.45 km2) is land and 0.14 square miles (0.36 km2) is water. Much of the water area consists of the Black Fork of the Mohican River, which flows through downtown; its location makes the city vulnerable to floods. 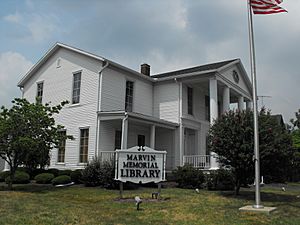 The sole library in the city of Shelby is Marvin Memorial Library, which was added to the National Register Of Historic Places in 1987. Marvin Library offers Story Time and summer reading programs for youth, a Teen Cafe for teenagers and the Adult Book Club for adults. Community meeting rooms and computer access are also offered through the library.

Marvin Library is named for Dan Marvin, a veteran of the American Civil War. He participated in the battles of Shiloh & Stone River, and was severely wounded. He purchased a house on West Whitney Avenue for $6,500 and presented it to the city in the early 1900s. His generosity to the city was greatly appreciated and memorialized in the name of the library. 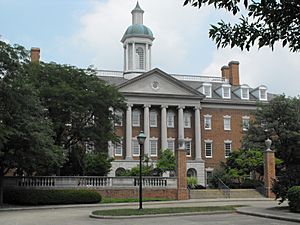 Shelby's public education is provided by the Shelby City School District [6]. The district serves students in kindergarten through high school in six school facilities. Shelby High School built a new, state of the art facility adjacent to the current high school's location. The new Shelby High School opened in 2013. Shelby High School was one of five "Race to the Top" grant recipients in the State of Ohio in 2011 and is scheduled to implement a new technology & project based curriculum as a result.

All content from Kiddle encyclopedia articles (including the article images and facts) can be freely used under Attribution-ShareAlike license, unless stated otherwise. Cite this article:
Shelby, Ohio Facts for Kids. Kiddle Encyclopedia.