Sidney is a city in Shelby County, Ohio, located approximately 36 mi (58 km) north of Dayton and 100 mi (161 km) south of Toledo. The population was 21,229 at the time of the 2010 census. It is named after English poet Philip Sidney and is the county seat of Shelby County. Many of the city's elementary schools are also named after famous writers, including Ralph Waldo Emerson, Henry Wadsworth Longfellow, and John Greenleaf Whittier. Sidney was the recipient of the 1964 All-America City Award. In 2009, it was the subject of the documentary film 45365. 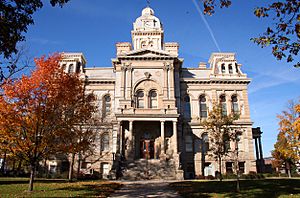 Sidney is home to the 1881 Second Empire courthouse; the 1877 Gothic revival Monumental Building, dedicated to the county's Civil War dead; the 1918 early-modern People's Federal Savings and Loan Association designed by influential architect Louis Sullivan, which has been designated a National Historic Landmark; and the "smallest house in Sidney" on Shelby Street.

The Big Four Bridge is a local landmark that has carried rail traffic since 1923. CSX Transportation uses the rail line and bridge as part of the "NYC" division of Conrail, a direct descendant of the New York Central Railroad and Penn Central Transportation. CSX also operates the north-south rail line, which was better known in earlier years as the Baltimore and Ohio Railroad and later as the Chessie System. 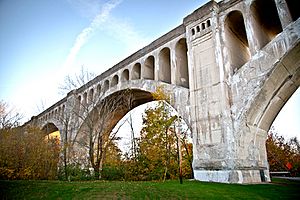 The Graceland Cemetery features monuments and memorials of large concrete angels and other structures and statues. 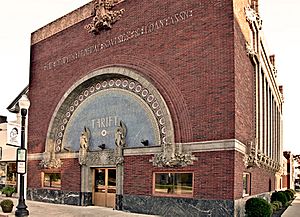 The 1918 Thrift Building, home to the People's Federal Savings and Loan Association, is a 20th-century icon. Its oversized arch is a signature element of its architect Louis Sullivan, who was mentor to Frank Lloyd Wright.

From the 1840s to 1913, canal boats carried Shelby County's products to Cincinnati or Toledo. Sidney was crossed by the Miami and Erie Canal's Sidney or Port Jefferson Feeder Branch. Before railroads came to Sidney, the canal provided most transportation, as roads were unpaved and not usable in all seasons. Part of the canal remains south of Water Street.

The City of Sidney, named after Sir Philip Sidney, a well-known poet and member of British Parliament, was originally a 70-acre (280,000 m2) parcel of land located along the west side of the Great Miami River. This land was donated by Charles Starrett to be used as the site of a new town designated to be the county seat of Shelby County. The area around Sidney was once the richly-forested hunting ground of the Shawnee and Miami Indian nations. This fertile area was developed as agricultural lands over time.

The construction of the Miami-Erie Canal between 1825 and 1837 connected Sidney in a north/south direction with the major trade centers in Ohio. In addition to opening the first significant "outside" trade for Sidney, the construction of the canal attracted an influx of settlers to the area.

As the influence of the canal declined, another transportation element, railroads, began to develop in Sidney. East-west rail began to be laid in 1851, followed by north-south rail in 1856. Sidney is still served by these railroad lines.

In the 1950s, the Interstate Highway contributed to the development of Sidney. It was named as "All-America City" in 1964. Today, Interstate 75 connects Sidney with Canada to the north, and Florida to the south. Sidney has four interchanges with Interstate 75, providing access for both commercial and industrial users.

Sidney is located 40 miles (64 km) north of Dayton, 85 miles (137 km) west of Columbus, 100 miles (160 km) south of Toledo, and 120 miles (190 km) east of Indianapolis. Sidney offers an historic downtown featuring the famous Louis Sullivan-designed People's Savings & Loan building, the Monumental Building (erected as a memorial to county residents who had died in the Civil War), and the Shelby County Courthouse. The Courthouse, which occupies one city-block known as Court Square, was recently named by the National Trust for Historic Preservation as one of the "Great American Public Places".

Sidney has an extensive parks and recreation system. When the City's first comprehensive plan was being developed in the mid-1950s, the City decided to have a park or recreation area within a half-mile of every residence. This goal has resulted in a system of 14 neighborhood parks, a baseball complex, softball complex, soccer complex, municipal swimming pool, and the 180-acre (0.73 km2) Tawawa Park, a nature and picnic area.

Sidney is the hometown of Paul Lauterbur, a renowned scientist and Nobel Prize winner who helped develop the MRI.

In 1984, President Ronald Reagan visited the city of Sidney on a train (the same train that President Franklin D. Roosevelt used during his visit to Sidney in 1944) while touring the country. President George W. Bush visited the town in 2004, eating at the Spot Restaurant in downtown Sidney. Republican presidential candidate Mitt Romney visited the Shelby County Fairgrounds in Sidney in 2012.

Sidney, Iowa derives its name from the community.

The town of Buckeye, Arizona was originally named after Sidney. Malin M. Jackson, who built Arizona's Buckeye Canal, was from Sidney.

Sidney, Ohio has a drive-in movie theatre, the Auto-Vue, located on the corner of 4th Street and Russell Road. The drive-in opens in May and closes in September. During the fall season, a large corn maze is created on the south side of town. The area has a driving range for golfers and a zip line.

Raise the Roof for the Art in the non-profit organization that was formed in 2009 with the sole purpose of rescuing and restoring a community landmark, The Historic Sidney Theatre. Once the organization acquired the theater, a group of dedicated citizens embarked on the journey to bring the facility back to its original roots as a performing arts center. The vision to transform the Historic Sidney Theatre is happening and soon this glorious space will be a first class facility in which to experience the arts, but also as a gathering place for our community. If you have not been to the theatre and would like a tour stop by the Raise the Roof office Tuesday afternoons 1-4pm.

The annual Country Concert is held at Newport, Ohio the 2nd week of July. Many country and western stars have played there over the years.

For the outdoor enthusiast, State Parks include Lake Loramie, Kiser Lake, Indian Lake, and Grand Lake St Marys. They are easy drives from Sidney. Camping, boating, hunting and fishing are common pursuits in the area. 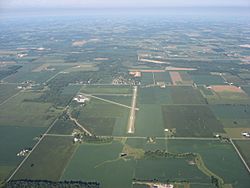 Aerial view of the Sidney Municipal Airport from the east

Sidney has two railroad lines. Both were built independently in the 1850s.

Until the 1960s, passengers could take the Knickerbocker Limited from Sidney to Grand Central Terminal in New York City. This east–west line was built as the Bellefontaine and Indiana Railroad which ran from Galion, Ohio to Union City on the Ohio-Indiana border. It was built in conjunction with the Indianapolis and Bellefontaine Railroad, providing a route between Cleveland and the East and Indianapolis, and later St. Louis. In 1864, the two were merged into the "Bee" Line: the Bellefontaine Railway. In 1869, the lines were merged into the first "Big Four": the Cleveland, Columbus, Cincinnati and Indianapolis Railway. In 1889, the second "Big Four" was formed: the Cleveland, Cincinnati, Chicago and St. Louis Railway. In the early 1920s, this railroad relocated its tracks from downtown Sidney to the south edge of the city over the new Big Four concrete arch bridge. Early in the twentieth century, it was leased by the New York Central System. Later the Big Four was taken over by the Penn Central, then Conrail, and finally CSX Transportation.

Other concrete arch bridges in the region were designed and built for the Big Four; they are located in Avon and Greencastle, Indiana, and Danville, Illinois.

In the 1950s, passengers could board a train in Sidney and take it south to Cincinnati or New Orleans. This north–south line was built as the Dayton and Michigan Railroad. In the 1860s it was leased by the Cincinnati, Hamilton and Dayton Railroad. It was taken over by the Baltimore and Ohio Railroad early in the twentieth century. Later the line was taken over by the Chesapeake and Ohio Railroad, then by CSX Transportation, and passenger services were reduced.

The Dixie Highway, later US 25, now known as County Rd 25A, ran north–south through downtown Sidney, connecting it with Toledo and Detroit to the north and Dayton and Cincinnati to the south. Interstate 75 was completed in the early '60s. Located west of Sidney, it took the place of the Dixie Highway and most of the traffic. Four exits from I-75 provide direct access to Sidney: exit 90 (Fair Road), exit 92 (State Route 47), exit 93 (State Route 29), and exit 94 (County Road 25A).

Sidney is the headquarters location for many companies and a branch location for many others. Many companies were formed in Sidney and continued to be operated by local residents. A diversified employer base offers jobs in manufacturing (especially in the automotive industry) and service sectors. The largest employer in Sidney is Emerson Climate Technologies, with more than 1,700 employees. In addition to the Sidney-based employers, Honda of America Anna engine plant, 7 miles north of Sidney, is the single largest employer in Shelby County, with 3,200 employees. Amos Press of Sidney publishes Coin World, Linn's Stamp News and other nationally distributed hobby publications. The agricultural base in the area has commodity grain, livestock, and dairy activities.

All content from Kiddle encyclopedia articles (including the article images and facts) can be freely used under Attribution-ShareAlike license, unless stated otherwise. Cite this article:
Sidney, Ohio Facts for Kids. Kiddle Encyclopedia.