Piqua ( PIK-wə) is a city in Miami County, southwest Ohio, United States, 27 miles north of Dayton. The population was 20,522 at the 2010 census. It is part of the Dayton Metropolitan Statistical Area.

It was founded as the village of Washington in 1807 by a soldier under Gen. Anthony Wayne.

In 1747, Fort Pickawillany was constructed by the British to protect their trading post at a Miami village of the same name. It was located at the confluence of Loramie Creek and the Great Miami River. (The present city of Piqua developed about a mile to the southwest.) In 1752 Charles de Langlade, an Ottawa war chief of partial French Canadian descent, attacked the fort. He led more than 240 Ottawa and Ojibwe warriors allied with French forces against the British and the Miami village in the Battle of Pickawillany. The Miami chief and a British trader were killed in the conflict.

After the battle, the British and Miami abandoned this site. The Miami rebuilt Pickawillany, and Piqua later developed near their village. The British soon took over the area after defeating the French in the Seven Years' War (1754-1763), known in British North America as the French and Indian War.

Piqua was settled as two separate communities in 1780, known as Upper Piqua and Lower Piqua. The two villages united by 1800. Officially incorporated in 1807, Piqua developed along with construction of the Miami and Erie Canal.

The word 'Piqua' is believed to be derived from a Shawnee language phrase: Othath-He-Waugh-Pe-Qua, translated as "He has risen from the ashes," related to a legend of the people. It became associated with the Pekowi, one of the five divisions of the Shawnee people, who were eventually known as the Piqua.

This local Shawnee history was also the source of the name of the community of Shawnee, founded in 1797 on the east side of the Great Miami River. It is adjacent to the former Pennsylvania Railroad corridor, later used by the merged Penn Central Transportation and subsequently by Conrail. Shawnee has long since been incorporated into Piqua. The Piqua High School Indians athletic teams took their mascot name from the local Native American history.

Rossville (since incorporated into Piqua) was an early local African-American settlement. Virginia planter John Randolph of Roanoke, who served as a US Representative and Senator, arranged for the emancipation of his nearly 400 slaves in his will of 1833. He also provided money for his executor to relocate the freedmen to the free state of Ohio, and to buy land and supplies to help them establish a settlement. The will was challenged but in 1846, his 383 slaves gained their freedom. Most of these freedmen settled in Rumley, Ohio. Some eventually founded Rossville and an associated cemetery, known as the African Jackson Cemetery. These are located on the northeast side of the Great Miami River; they may be accessed by nearby North County Road 25-A.

Piqua was home to the first municipally operated nuclear power plant, the Piqua Nuclear Generating Station. It operated from 1962 to 1966, leading to Piqua being nicknamed "The Atomic City." This major demonstration project was a failure. The United States Atomic Energy Commission (now US Department of Energy) bought out the contract with the City of Piqua, in order to terminate the operations early. During this period a name brand automotive battery was manufactured and marketed locally as the "Piqua Atomic Power Plant." 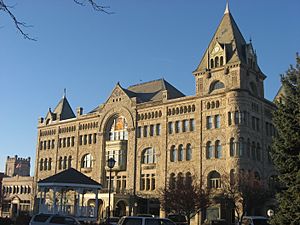 The "Orr-Statler Block" building at the corner of Main and High Streets was erected in 1891 and long dominated downtown. For many years its core tenant was a hotel of more than 100 rooms, first known as the "Plaza," later as the "Favorite," and finally as the "Fort Piqua." The hotel closed in the 1980s.

The building's street-level commercial spaces were occupied by a variety of businesses over the years, including a barbershop, grocer, bank, the local telephone company business office, Western Union, a combination bus station and taxi office with a very popular soda fountain and lunch counter, and others. Just prior to the start of the Prohibition era, the hotel's bar was moved to the basement level. It is rumored to have closed only its outside entrance during those years, operating as a speakeasy.

The building suffered disrepair and neglect for a period, and renewal plans seemed unable to secure funding. In a public-private redevelopment, the building was fully renovated during a two-year project. Since 2008, its major tenant has been the city's public library. In addition, the building is the location of Mulligan's Pub, a full-scale restaurant and bar, complete with a patio for live entertainment. The building is now known as Fort Piqua Plaza.

The Great Miami River runs through Piqua. The area at the south end of town on the east side of the river is known as Shawnee.

The city of Piqua is the home of Hartzell Propeller, a producer of small aircraft propellers. Evenflo (formerly Questor Juvenile Furniture) is the leading manufacturer of infant and toddler car seats, and has become one of Piqua's leading employers and industries.

In the late 1890s, Southwest Ohio was the heart of the US flaxseed growing area. There were some 13 linseed oil mills in Piqua, where the flaxseed was "crushed" to extract the vegetable oil, named linseed oil. The flax fiber was used to make both cloth and paper. The oil had a variety of industrial uses. Linoleum is a manufactured flooring product for which linseed oil is the binder. One of the vegetable oil mills in Piqua burned down in the 1890s, a common fate for wooden buildings soaked with vegetable oil. Its owner, American Linseed Oil Company, dispatched Alfred Willard French, their Chief Engineer, from Brooklyn, New York, to organize and supervise the rebuilding of the oil mill.

During the rebuilding of the mill, French included a machine he had invented and patented in 1898, a "cake trimmer", and purchased the most modern equipment then available. He met the leading citizens of Piqua. They were impressed with French, who had graduated from the Massachusetts Institute of Technology in three years, and had entrepreneurial spirit. They decided to invest in a new company he wanted to start. The French Oil Mill Machinery Company was founded 25 May 1900, with French as president, to make "improved oil mill machinery". By 1905 the company was exporting its patented and rugged vegetable oil mill extraction machinery all around the world. Today, the company has customers in over 80 countries, still serving the vegetable oil extraction market (to press such seeds as soybeans, cottonseed, rapeseed, canola, and many others). In addition, the company is a world leader in synthetic rubber dewatering and drying machinery, and in hydraulic molding presses for rubber, thermoplastic and composite materials.

During the late 19th century and much of the 20th century, Piqua was a major center of underwear production. A yearly Outdoor Underwear Festival was held downtown from 1988 until shortly after the demise and demolition of the factory owned by Medalist-Allen A, a direct descendant of the Atlas Underwear Company. Originally the festival had a serious historical focus. In later years it attracted adventurous types from surrounding towns, and Piqua residents discouraged their children from attending. Heritage Green Park now occupies the former Medalist factory site.

The Meteor Motor Car Company had a brief run as an independent record label and phonograph manufacturer in the 1920s. Acquired by Wayne Corporation of Richmond, Indiana, which manufactured school buses, it operated as the Miller-Meteor division. Miller-Meteor produced ambulances and hearses before closing down in 1979.

The Piqua Coca-Cola Bottling Company, owned by the Lange family, was located on the downtown square at the northeast corner of Main and High streets. It produced its signature product along with Sprite, Tab and Fresca in glass bottles for the Upper Miami Valley; metal canned products were shipped in from a plant in Speedway, Indiana. In the mid-1970s, the plant was bought by the Dayton Coca-Cola Bottling Company. The increased demand for Coke products in two-liter plastic bottles and cans made the aging local plant obsolete; it was closed down and razed by the end of the decade. A newer bottling plant was constructed in Huber Heights. A statue of pilot Don Gentile was erected at the site of the defunct plant.

The Val Decker Packing Company, which operated until 1981, was a local producer of hams, hot dogs, and other meats and lard under the tagline "Piquality." The large red steel cans, which contained the lard product, are now sought-after as collectors' items. The building which housed the meat packing plant was renovated in 1987 for office use by the Piqua Board of Education and several small businesses.

Piqua's industrial past produced a prosperity reflected in residential areas near downtown, which contain numerous large mansions and homes. Most notable is the Leo Flesh Mansion, built in the Chateauesque style. It looms over many of the surrounding buildings in the neighborhood. A "sister" house in Dayton, Ohio, was designed by the same architect.

Piqua's shopping mall, Miami Valley Centre Mall, opened in 1988 and was renovated in the mid-1990s. Its anchor stores include JC Penney, Elder Beerman, and Sears. Miami Valley Crossing (formerly Piqua East Mall, opened in 1970) was redesigned and updated in the late 1990s as a plaza with anchor stores, Big Lots, Wal-Mart, Jo-Ann Fabrics, El Sombrero Restaurant, and The Home Depot.

According to Piqua's 2018 Comprehensive Annual Financial Report, the top employers in the city are:

All content from Kiddle encyclopedia articles (including the article images and facts) can be freely used under Attribution-ShareAlike license, unless stated otherwise. Cite this article:
Piqua, Ohio Facts for Kids. Kiddle Encyclopedia.