Adams County lies in northeastern Indiana in the United States and shares its eastern border with Ohio. It was officially established in 1836. The county seat is Decatur.

According to the 2010 census, its population was 34,387, an increase of 2.27% from 33,625 in 2000. The county has four incorporated cities and towns with a total population of over 15,000, as well as many small unincorporated communities. The county is divided into 12 townships which provide local services. There are four Indiana state roads in the county, as well as three U.S. Routes and one railroad line.

Adams County was created by statute on February 7, 1835, and organized March 1, 1836. Its name honors the sixth President of the United States, John Quincy Adams. The site of the county seat was chosen May 18, 1836.

The first non-Native American settlers arrived in what is now Adams County in 1835. They arrived as a result of the end of the Black Hawk War as well as the completion of the Erie Canal. They consisted entirely of settlers from New England. These were "Yankee" settlers, that is to say they were descended from the English Puritans who settled New England in the colonial era. They were primarily members of the Congregational Church though due to the Second Great Awakening many of them had converted to Methodism and some had become Baptists before coming to what is now Adams County. The Congregational Church subsequently has gone through many divisions and some factions are now known as the Church of Christ and the United Church of Christ. When the New England settlers arrived in what is now Adams County there was nothing but a dense virgin forest and wild prairie.

The New England settlers commissioned the first courthouse in 1839, it was a two-story frame building. The first jail was a log building that was completed in 1837. The present Adams County courthouse was built in Decatur in 1872–1873 at a cost of $78,979. The designer was J. C. Johnson, who had been trained as a carpenter and joiner and became a self-taught architect; he won second place in the Indiana State Capitol design competition. The construction was done by Christian Boseker of Fort Wayne. It is built of red brick with stone ornamentation. 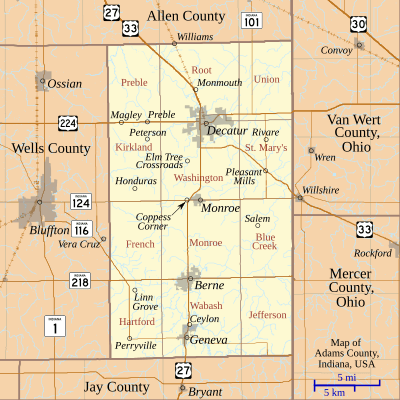 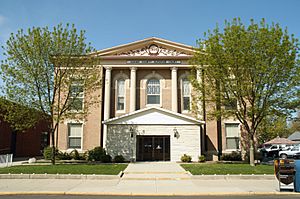 Adams County is bordered on the north by Allen County, on the west by Wells County, and on the south by Jay County. The two Ohio counties of Van Wert and Mercer lie to the northeast and southeast, respectively.

The county has four incorporated settlements, all of which lie in a rough north–south line. The city of Decatur is the largest and is also the county seat, and is in the northern part of the county where U.S. Route 27 and U.S. Route 33 intersect with the east–west U.S. Route 224. U.S. Route 27 continues south through the town of Monroe, near the center of the county, and then on through Berne and Geneva.

CSX Transportation operates a rail line that runs from Decatur to the northwest toward Fort Wayne.

Festivals and Fairs in Adams County

All content from Kiddle encyclopedia articles (including the article images and facts) can be freely used under Attribution-ShareAlike license, unless stated otherwise. Cite this article:
Adams County, Indiana Facts for Kids. Kiddle Encyclopedia.