Allen County is a county in the U.S. state of Indiana. As of the 2010 Census, the population was 355,329, making it the third-most populous county in Indiana. The county seat and largest city is Fort Wayne, Indiana.

Allen County is included in the Fort Wayne Metropolitan Statistical Area and the Fort Wayne–Huntington–Auburn Combined Statistical Area. Allen County is the cultural and economic center of northeastern Indiana. The county is within a 200-mile (320 km) radius of major population centers, including Chicago, Cincinnati, Cleveland, Columbus, Detroit, Indianapolis, Louisville, Milwaukee, and Ontario, Canada, and within a one-day drive of one-third of the U.S. population and one-fifth of Canadians.

Occupied for thousands of years by cultures of indigenous peoples, Allen County was organized by European Americans on December 17, 1823, from Delaware and Randolph counties; and formed April 1, 1824. The county is named for Colonel John Allen, an attorney and Kentucky state senator who was killed in the War of 1812. Fort Wayne, founded at the confluences of the Maumee, St. Joseph, and St. Marys rivers, was chosen as the county seat in May 1824. 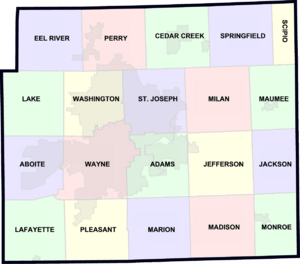 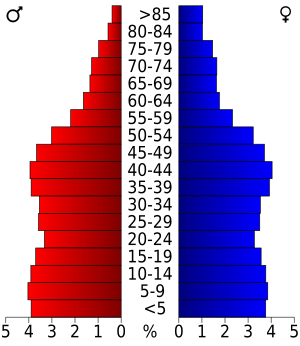 Since 1852 Allen County is home of an Old Order Amish community that speaks an Alsatian dialect, which is quite rare among Amish. There are about 3,500 Amish living around Grabill and New Haven. Fort Wayne is cited as having the highest Burmese refugee population in the United States, with between 3,000–3,500.

Allen County Parks are only partially tax supported. Operating expenses must be met through user and program fees. Admission is $2.00 per person age 7 and older. Passes are available on an annual basis (good for one year from purchase date) starting at $15.00. Activities at various parks include hiking, swimming, fishing, sledding, cross-country skiing (rentals available), playgrounds, picnic areas, play fields, and many nature-based programs for all ages. Wheeled vehicles (except wheelchairs) are not permitted on trails, and pets are not permitted in the state nature preserve areas (clearly marked). 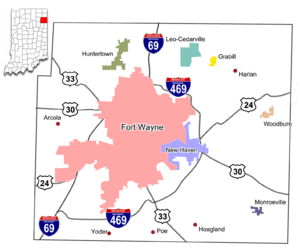 All content from Kiddle encyclopedia articles (including the article images and facts) can be freely used under Attribution-ShareAlike license, unless stated otherwise. Cite this article:
Allen County, Indiana Facts for Kids. Kiddle Encyclopedia.