Kids Encyclopedia Facts
Not to be confused with Decatur County, Indiana.

Decatur is a city in Root and Washington townships, Adams County, Indiana, United States. It is the county seat (and the largest community) of Adams County. Decatur is home to Adams Memorial Hospital, which was designated as one of the "Top 100" Critical Access Hospitals in the United States. The population of Decatur was 9,913 at the 2020 census.

The first non-Native American settlers arrived in what is now Decatur in 1835. They arrived as a result of the end of the Black Hawk War as well as the completion of the Erie Canal. They consisted entirely of settlers from New England. These were "Yankee" settlers, that is to say they were descended from the English Puritans who settled New England in the colonial era. They were primarily members of the Congregational Church though due to the Second Great Awakening many of them had converted to Methodism and some had become Baptists before coming to what is now Decatur. The Congregational Church subsequently has gone through many divisions and some factions are now known as the Church of Christ and Church of God. When the New England settlers arrived in what is now Decatur there was nothing but a dense virgin forest and wild prairie.

Decatur was founded in 1836. It was named for Stephen Decatur, Jr., one of the captains of the original six frigates of the US navy. The first post office in Decatur was established in 1837.

The average age for Decatur residents was 40.5 years. Of the total population, 6.8% were veterans and 15.8% have a visible or non-visible disability. An estimated 4.6% of residents are uninsured.

Of the 4,278 households, 30.9% had children under the age of 18 living with them, 36.8% were married couples living together, 35% had a female householder with no spouse present, and 27.3% of the residents were never married. The average household size was 2.24.

Of the total residents of Decatur, 43.9% have a high school or equivalent degree and 12.9 have a bachelor's degree or higher. The latter is 70% lower than the state average. The majority of residents work in manufacturing (37.4%), education, social services and health care (14.2%) and retail (13.6%).

Only 76.3% of residents had broadband internet access, in contrast to 80.1% of state residents. 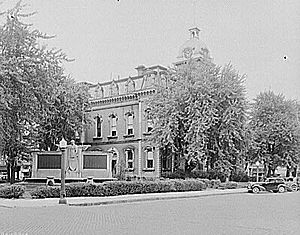 Decatur has a public library, a branch of the Adams Public Library System.

All content from Kiddle encyclopedia articles (including the article images and facts) can be freely used under Attribution-ShareAlike license, unless stated otherwise. Cite this article:
Decatur, Indiana Facts for Kids. Kiddle Encyclopedia.