Marion is a city in and the county seat of Marion County, Ohio, United States. The municipality is located in north-central Ohio, approximately 50 miles (80 km) north of Columbus.

The population was 36,837 at the 2010 census. According to the US Census 2008 estimate Ohio's Columbus–Marion–Chillicothe Combined Statistical Area has 2,002,604 people. Marion is the county's largest city and the center of the Marion Micropolitan Statistical Area (as defined by the United States Census Bureau in 2003). President Warren G. Harding, a former owner of the Marion Star, was a resident of Marion for much of his adult life.

The city and its development were closely related to industrialist Edward Huber and his extensive business interests. The city is home to several historic properties, some listed on the National Register of Historic Places listings in Marion County, Ohio.

The current mayor of Marion is Scott Schertzer. 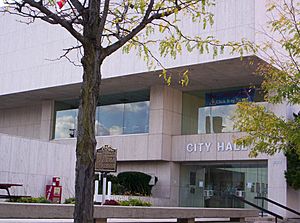 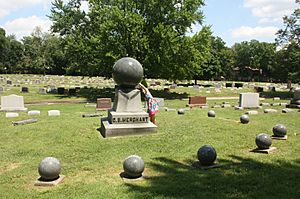 A curious visitor to the Marion Cemetery inspects the moving sphere atop the Merchant family grave marker.

Marion was laid out in 1822, and is named in honor of General Francis Marion.

Marion was one of Ohio's major industrial centers until the 1970s. Products of the Marion Steam Shovel Company (later Marion Power Shovel) built the Panama Canal and in the 1960s, NASA contracted with Power Shovel to construct the crawler-transporters that moved the assembled Saturn V rockets, used by Project Apollo, to the launch pad. In 1911, 80% of the nation's steam shovel and heavy duty earth moving equipment was manufactured in Marion, Ohio.

The city is also a rail center for CSX, and Norfolk Southern. Marion has long been a center of grain based (corn and popcorn) snack and other products (Conagra, Wyandot Snacks, General Mills) given its close proximity to nearby growing regions in adjacent counties. Whirlpool Corporation of Benton Harbor, Michigan is the largest employer in the city operating the largest clothes dryer manufacturing facility in the world. Nucor Steel's facility in Marion is the largest producer of rebar and signpost in Ohio.

The city is located about 50 miles (80 km) north of Ohio's capital city, Columbus, due north along U.S. Route 23. Marion occupies most of Marion Township, which is located just outside the city limits.

There were 12,868 households of which 33.5% had children under the age of 18 living with them, 40.0% were married couples living together, 17.1% had a female householder with no husband present, 6.4% had a male householder with no wife present, and 36.5% were non-families. 30.4% of all households were made up of individuals and 12.7% had someone living alone who was 65 years of age or older. The average household size was 2.45 and the average family size was 3.00.

The Palace Theatre (c. 1928) is a 1440-seat atmospheric theatre designed by John Eberson in the Spanish Colonial Revival architecture style. It has been in continuous operation since it opened on August 30, 1928. Restored in 1975, it is one of only 16 remaining Eberson-designed atmospheric theatres still in operation in the United States today. Eberson designed the theatre for Young Amusement Company, at an original cost of one-half million dollars. Inside, the auditorium resembles an outdoor palace courtyard, complete with a blue sky and twinkling stars. It has many original Pietro Caproni sculpture castings. The theatre is registered on the National Register of Historic Places. Adjoining the theatre is the May Pavilion, a two-story event space for chamber orchestra concerts, jazz and soft rock bands, amateur theatre productions of plays and small cast musicals, wedding receptions, graduation parties and meetings.

The theatre presents touring artists and children's theatre. During the off-season and at other times during the year when the theatre would be otherwise dark, non-equity amateur theater musicals, community band concerts and high school productions are presented on the main stage and in the smaller May Pavilion. The theatre also exhibits current motion pictures.

Heritage Hall & the Old Post Office The Old U.S. Post Office (Marion, Ohio) was built in 1910. It is listed on the National Register of Historic Places (1990). The building is now used as the Heritage Hall museum of the Marion County Historical Society. The museum is dedicated to the preservation of Marion County, Ohio history.

Wyandot Popcorn Museum Heritage Hall is also home of the Wyandot Popcorn Museum, the "only museum in the world dedicated to popcorn and its associated memorabilia." Opened in 1982 prior to the second Popcorn Festival, the museum's collection consists of classic antique poppers made by Cretors, Dunbar, Kingery, Holcomb and Hoke, Long-Eakin, Excel, Manley, Burch, Star, Bartholomew, Stutsman and Advance. Not only is it one of only two Popcorn Museums in the world, it also represents the largest collection of restored popcorn antiques.

Warren G. and Florence Kling Home A national presidential site, the Harding Home was the residence of Warren G. Harding, twenty-ninth president of the United States. Harding and his future wife, Florence, designed the Queen Anne Style house in 1890, a year before their marriage. They were married in the home and lived there for 30 years before his election to the presidency. Like James A. Garfield, an earlier U.S. president from Ohio, Harding conducted his election campaign mainly from the house's expansive front porch. During the 3 month front porch campaign, over 600,000 people traveled to the Harding Home to listen to the candidate speak. Harding paid $1,000 dollars to have a Sears catalog house built behind his home so newspaper reporters had workspace to type their stories. The press house is also open to the public. The site is being expanded to include a Presidential Center for Harding, expected to be opened in 2020, the 100th anniversary of Harding's election to the Presidency.

Huber Machinery Museum This museum contains examples of Edward Huber's early steam and gasoline tractors and road-building equipment. Huber Manufacturing introduced a thresher in 1875, a steam traction engine in 1898, its first motor graders in the 1920s, a primitive hydraulic control in 1926, and the first Maintainer, a tractor-sized integral motor grader, in 1943. Other Huber products included wheel tractors, agricultural equipment, and three-wheel, tandem and pneumatic rollers.

Marion Union Station and Museum More than 100 trains pass by Union Station every day. The museum showcases an impressive collection of memorabilia and the AC Tower, which was once the main switching facility for the Erie Railroad, Marion Division. During World War II, thousands of soldiers passed through Union Station on their way to Europe.

Marion is home to the Marion Popcorn Festival, an annual event that is held in downtown Marion in September, the weekend following Labor Day. The Marion County Fair is held every year in Marion during the first week of July. Saturday in the Park is a children's festival that is held each year in Lincoln Park.

The Harding Home was the residence of Warren G. Harding, twenty-ninth president of the United States. Harding and his future wife, Florence, designed the Queen Anne Style house in 1890, a year before their marriage. They were married there and lived there for 30 years before his election to the presidency.

The Harding Memorial, as it was called by thousands of people, including schoolchildren who donated to its construction fund, is the burial location (tomb) of the 29th President of the United States, Warren G. Harding and First Lady Florence Kling Harding. Later referred to as the Harding Tomb, it is located at the southeast corner of Vernon Heights Boulevard and Delaware Avenue. Construction began in 1926 and was finished in early 1927, the Greek temple structure is built of white marble. Designed by Henry Hornbostel, Eric Fisher Wood and Edward Mellon, the structure is 103 feet in diameter and 53 feet in height. The open design honors the Hardings' wishes that they be buried outside.

Constructed in 1924, the Hotel Harding was developed to provide suitable lodging for Warren G. Harding's visitors who came to Marion after his presidency. It was located close to Union Station, the city's main rail station. The building is no longer used as a hotel. Renovated in 2005, the building is now used for low-income senior citizen residences housing and as residence for OSUM students. Its grand lobby remains in much the same condition as the original.

Merchant Family Memorial (The Rotating Ball). Marion Cemetery is the home to the Merchant family grave marker, known for its unintended movements. The marker consists of a large grey granite pedestal capped by a two-ton granite sphere four feet in diameter. The sphere moves on its base a 1/4 to a 1/2 inch every year, as measured by the distance traveled by the unpolished spot from where it was mated to the pedestal. While the movement of the sphere is thought to be facilitated by freeze-thaw cycles, earth tremors, or trapped air or water under the base, there has been no conclusive explanation for patterns that the sphere seems to follow. The movements of the sphere have been documented by numerous news outlets and it has been featured in Ripley's Believe it or Not (September 29, 1927). This has also been documented in Frank Edwards' book, Strange World, from an edition in the early to mid sixties. There are several web pages on the internet concerning this tombstone.

The Receiving Vault. The Marion Cemetery Receiving Vault is a funerary structure in the main cemetery of Marion, Ohio, United States. Constructed in the 1870s, this receiving vault originally fulfilled the normal purposes of such structures, but it gained prominence as the semipermanent resting place of Marion's most prominent citizen, U.S. President Warren G. Harding.

All content from Kiddle encyclopedia articles (including the article images and facts) can be freely used under Attribution-ShareAlike license, unless stated otherwise. Cite this article:
Marion, Ohio Facts for Kids. Kiddle Encyclopedia.