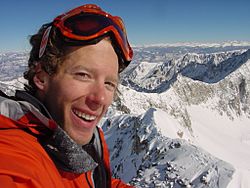 Aron Lee Ralston (born October 27, 1975) is an American outdoorsman, engineer, mountain climber, and motivational speaker. He is best known for having to amputate his own right arm to free himself from a boulder in Blue John Canyon, in eastern Wayne County, Utah on April 26, 2003. The event was the subject of his autobiography Between a Rock and a Hard Place and the 2010 movie 127 Hours, starring James Franco.

Ralston was born in Marion, Ohio and was raised in Denver, Colorado. During adulthood, he moved to Aspen, Colorado to pursue a life of climbing mountains. He has two children and lives in Boulder, Colorado.

All content from Kiddle encyclopedia articles (including the article images and facts) can be freely used under Attribution-ShareAlike license, unless stated otherwise. Cite this article:
Aron Ralston Facts for Kids. Kiddle Encyclopedia.