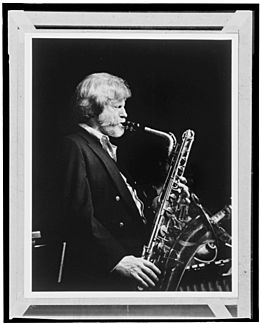 Gerald Joseph "Gerry" Mulligan (April 6, 1927 – January 20, 1996) was an American jazz saxophonist, clarinetist, composer and arranger. Though Mulligan is primarily known as one of the leading baritone saxophonists in jazz history – playing the instrument with a light and airy tone in the era of cool jazz – he was also a notable arranger, working with Claude Thornhill, Miles Davis, Stan Kenton, and others. Mulligan's pianoless quartet of the early 1950s with trumpeter Chet Baker is still regarded as one of the more important cool jazz groups. Mulligan was also a skilled pianist and played several other reed instruments. Mulligan reportedly had a relationship with actress Judy Holliday until she died in 1965, and with actress Sandy Dennis from 1965 until they broke up in 1976.

All content from Kiddle encyclopedia articles (including the article images and facts) can be freely used under Attribution-ShareAlike license, unless stated otherwise. Cite this article:
Gerry Mulligan Facts for Kids. Kiddle Encyclopedia.